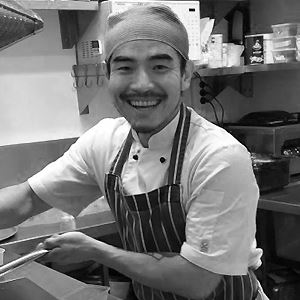 There were two things that I had always been interested in since I was little: sports and cooking.

My early life was very ordinary in Korea, there was a lot of pressure from society to be a good student, to get good grades in school and to study hard.

As a typical Korean guy, I went to the military service at the age of 19 for two years. I was chosen to be a cook in the police department (Riot). After military service, I had a choice to go back to university or to do something else. I chose to study to be a policeman, only because they seemed to have a very stable and secure life, especially financially. To be a policeman in Korea, I had to study very hard, because there were more than 50 candidates for each position. At some point, I went to a Buddhist temple in the middle of the mountains to focus on studying for two months. I never knew that this would change my life dramatically.

I met a guy at the temple who convinced me to find a dream and to follow it. In my eyes, at that time, he was a guru like Tony Robbins. Shortly after, that conversation led me to travel to Australia to become a Chef.

I went to William Blue college in Sydney, studying commercial cooking in hospitality management. While I was studying, I worked in a few restaurants, from Japanese and Italian to Australian, where I could absorb all the knowledge possible.

After studying, the college recommended me to work at Sheraton Mirage in Pork Douglas. I was there for three years. After that, I moved to Melbourne to work at No 8 by John Lawson in the Crown casino. I was fortunate enough to be a part of the team that achieved one hat. I moved onto working at a small Asian tapas restaurant and opened it as Head Chef. This was a very challenging experience and I made a lot of mistakes. After opening the restaurant, I thought my Chef career was finished. I didn’t have any motivation, even though I was offered to be a part of so many different places in Melbourne. I guess, I sort of burnt out. I took six months off from being a Chef. After six months, I moved to Cairns and joined Shangri-La Cairns, taking care of North Bar and Kitchen for over a year.

After that, I joined Pepper’s Beach Club in Port Douglas as a Head Chef for almost a year and now I’m at Fusion Art Bar & Tapas. I feel so lucky to have met the owner, she is so passionate about the industry and always supports me in every way.

No, I wanted to be a pro baseball player when I was a child. I have always loved sports. In fact, in my early 20s, I was a personal trainer in Korea. I still do PT, very casually.

Although I also loved cooking from a young age, I never though of it as a career until I decided to move to Australia and become a Chef.

Obviously, I have quite a bit of influence from my background, my mentors and my journey as a Chef. Also, living in a multicultural country, we have the privilege to be exposed to so many different ingredients and styles. I think those two factors made my style as a Chef.

In Cairns, we have a lot of the vegetables in the market that you can easily see in South American cuisine. I am trying to take advantage of living in tropical North Queensland these days.

The more I learn about Chinese ingredients, the more I think that the cuisine is limitless.

Obsessive and compulsive about?

The gym. I train hard almost every day, whether I’m happy or stressed. Someone once said to me that maybe I train so hard to stay sane from this industry.

John Lawson (former Chef at No 8 by John Lawson): he is my former Chef, he showed me how to overcome anything in life by overcoming a brain tumour. Also, he taught me about healthy cooking.

Aaron Habgood (Executive Chef at Shangri-La Cairns): he inspired my passion about cooking once again, when I was almost about to give up. He inspires me to not only be a good Chef, but also a good leader. He is one of the hardest working Executive Chefs in a five-star hotel I have ever seen. He manages a lot of Chefs, but still has a great passion and desire to cook beautiful food.

Tom Kerridge: I am always inspired by his bold and honest cooking.

It is a very honest industry.

Very hard to choose, because I have a few dishes that are unique, but perhaps the Oyster Charcoal.