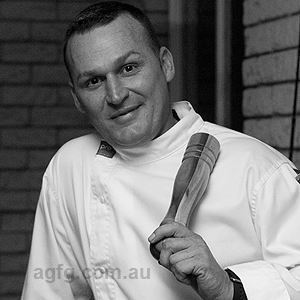 History: 24 years thus far, wow, where to start. I started back in 1990 in Ipswich QLD. As a talkative Cheeky little kid, I got myself a job as a
kitchen hand at a Chinese Restaurant called the Golden Dragon. I then worked at Bremer’s 350 seat Chinese Restaurant where after 9 months I filled in as Head cook for 7 months.
Then In June 1994 I was discovered by the General Manager of the Sheraton ITT Brisbane during Bremer’s busy service. It was then I stepped right into the Sheraton’s Modern culinary world at its best. We had butchers, bakers, fishmongers, pastry Chefs, stewards and everything else in between.
It was there, I learnt so much including western knife skills, French, German, English, basic Italian and Mediterranean flavours and techniques.

After the Sheraton, I spent time learning traditional Italian Culinary origins (Sicilian) cuisine in a small restaurant in Brisbane. After that I travelled south to Coffs Harbour for a bakery consulting job for SOCOG contracts. There I received a Bronze medal for Bakery pie from MBAA in 1999. It lead me on to a hotel group that took me out to Northern NSW to build and set up restaurants and deli style café eateries. I then returned to Brisbane where I became Head chef of Ryan’s Seafood Restaurant for a while – that was amazing, getting to work with live and fresh caught seafood. Soon after I was offered a
contract taking me to China for a hotel position for a year which as you can imagine was another whole new world of cookery and ingredients to explore.

Once I returned to Australia I took various head chef positions continuing to explore and challenge customers’ palette perceptions and opinions. Working as an Executive chef at Arhmet’s Turkish restaurant South Bank Brisbane exploring Middle Eastern cuisine. I also got into Consulting for various Franchises with start-ups COGS and culinary templates and systems mentoring whilst doing functions at QPAC for Lyre Birds and other entertainment centres. By 2006 I experimented with the mining industry boom but found it was killing my culinary drive and ambition. So I decided on a big move to challenge my skills by accepting a position as Executive Chef for the Marritz Alpine Hotel Resort where I succeeded in creating 360 original a-la-carte fine dinning dishes as well as doing a cooking segment for Channel Vision, highlighting the first Australian Executive chef to produce Cuisine in
the upmarket European Hotel in over 50 years. Upon completing my contract for the Marritz, I worked for the Ramada in Hervey Bay doing a start-up Fine dinning restaurant & café with Guy Leech designing a completely nutritionally balanced range of menus.

In 2011 I moved to Sydney to expand my personal education and explore the new look of the Culinary scene I had heard so much about. Since being in Sydney I have worked as a group Executive chef for a café group Kingston & Co. I also worked for the Hard Rock café as an Executive Chef taking me to Paris, Prague and Amsterdam and briefly back to the Gold Coast. I have done a lot of start-up work for various Hospitality groups and individuals. I have been lucky enough to have a signature dish published in The Mosman Meanders’ book. One of my great experience’s was working recently as a consultant/Executive Chef for Pepsico Australia Research & Development, designing all natural range of special edition chips for Red Rock Deli, my favourite are the Roasted Chicken Lemon & Thyme.

My career has been progressive educational and various, traveling the world and making the most of the energy we call youth. I am now embarking on a learning curve in the Culinary Food Science World undertaking a Bachelor of Food Science and Technology and then I hope to be able to give nutrition back to society on a corporate level.
Have you always wanted to be a Chef?

Originally, I wanted to be a doctor – but I didn’t have the patience. First career choice was an Architect but at the age 12 I fell in love with the flavours and Fragrance’s of food, Asian cooking to be precise and that’s where a hobby became a life or career depending on your view.

I combine the beautiful colours and textures that nature provides, predominantly from local area’s and experiment with old and new school techniques of our culinary world to create what I would call rustic multi cultural Australian cuisine.

A Californian Raison reduction as an additive, used with red meat jus or seafood and different herb salads.

My inspirations come from chefs like Matt Moran and Justin North for business and flavour combinations. Chefs like Paul Leete and Mark Best inspire me for creativity and boldness. However if I had to say one inspiration that drives me the most, it would be the fresh produce and sustainable animal proteins I get to work with. More recently for me a science degree is a natural progression and for that inspiration came to me through Heston Blumenthal.

I love getting to create healthy enticing dishes that inspire people to eat nutritionally and sustainably. I am also a big fan of hospitality by definition as a way of life. As I would say: doing god’s work (feeding the masses).
An ingredient you can’t live without?

Farm to Foreshore, a modern day twist on the classic Surf & Turf.