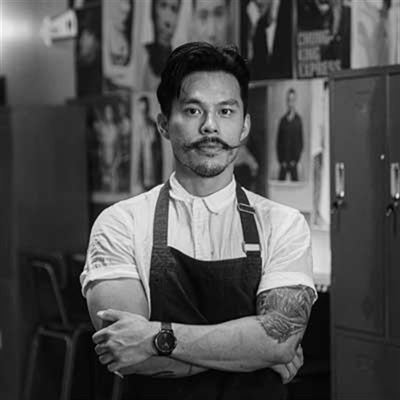 Born:
Taipei, Taiwan, I grew up in Vancouver, Canada.
History:
I started my career in Sydney at the 3-hatted restaurant The Bridge Room and Quay in 2012, where I quickly learned what working at the highest level of dining entails.
I was amazed at the incredible amount of focus and detail in all the things you could do with food that I had never seen before; plus the fact that I would be able to travel the world while honing my craft got me hooked right away.
I spent the next 10 years working in different cities around the world, including stages at 3 Michelin starred restaurants Benu, Eleven Madison Park and The French Laundry.
The most influential time of my career was in London when I was the Development Chef for 1 Michelin starred restaurant Fera at Claridge's.
It was during this time that I really discovered my creativity in cooking. All my experiences living and cooking in different cultures really come together at Mongkok Tea House, where we are creating our own style of fusion cuisine.
Have you always wanted to be a Chef?
Ever since I dropped out of Uni to start cooking when I was 19.
How would you define your style?
Refined fusion - creating dishes that make sense to different cultures in their own ways.
What is your feature flavour these days?
You can never go wrong with spring onion.
Obsessive-compulsive about?
Straight-cut tape labels that have been labelled on a straight angle.
Your greatest culinary influence:
Paul Lobban, Senior Sous Chef when I was at Fera at Claridge's.
What do you love about this business?
The friendships that are made during all the crazy hours spent together.
An ingredient you can’t live without?
Sugar.
Most ‘eyebrow-raising’ menu item?
I don’t think there’s anything too ‘eyebrow raising’, but If I had to choose it would be our Hong Kong BBQ Oyster. It’s a warm oyster grilled with lap Cheong sausage and a duck/chicken fat char siu glaze, covered with duck crackling. It’s basically all the flavours of a Hong Kong BBQ shop in a single oyster shell.
Signature dish:
Honey roasted dry-aged duck with spices, Medjool date and osmanthus. Step back in time to the ‘Golden Years’ of 1970s Hong Kong at Mongkok Tea House, an homage to Hong Kong on Burke Road in Camberwell. Based on the concept of ‘Cha Chaan Teng’ or Hong Kong-style cafes, Mongkok Tea House combines traditional Chinese and Western cuisines but reimagined into a more refined and modern style. By night neon lights glow over the retro diner-esque room, while you are presented with a smoke-encased cocktail released in front of you. Do not miss signature dishes of Masterstock poached chicken with truffle glaze and ginger spring onion relish, chilled silken soy custard with cucumber vinaigrette and trout roe; or red braised lamb belly, yellow pickled daikon, mint and spring onion pancake. Finish indulgently with a dessert of whipped Baijiu cheesecake and Nashi pear.