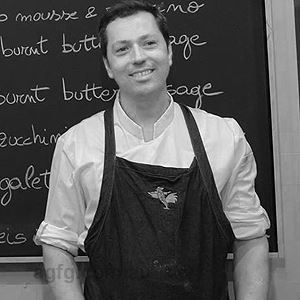 Born:
Modena, Italy.
History/Bio:
I was born in Modena, Emilia Romagna, a land of luxury cars and premium quality food. While attending university, I started working in hospitality as a waiter and bar tender.
In 2002, I decided to get behind the stove in the local Trattoria Salvaterra, where I mastered the traditional “Cucina Emiliana.” I then became a pasta expert working at “La Spaghetteria,” a restaurant which specialised in spaghetti.
In 2005, I realised I needed to take my skills to the next level and I enrolled at ALMA cooking school by Gualtiero Marchesi, in Colorno (Parma). As a part of my studies, I worked for six months at “Il Vecchio Ristoro” di Alfio e Katia, a Michelin starred restaurant in Aosta. Here, under the guidance of Chef Alfio Fascendini, I understood the importance of balancing ingredients in harmony, using roots and fresh local produce, with an influence from France in the preparation of sauces and stock.
In 2006, I landed my dream job and became Chef de Partie at Il Rigoletto, in Reggiolo, a beautiful two Michelin star restaurant near Parma. Working with Chef Gianni d’Amato I refined my skills towards excellence. Unfortunately, this stunning venue set in a seventeenth-century manor was destroyed by the great Earthquake that devastated Modena, Reggio and Mantova in 2012.
In 2008, I moved to Sydney and explored the local restaurant scene, working at multiple venues including Otto in Woolloomooloo, Pendolino and Fratelli Paradiso, who asked me to open their new venue, 10 William Street, as a Head Chef.
After becoming familiar with Australian taste and culture, my attention was caught by the catering industry, so I started a collaboration with Pearl Catering, one of the best firms in Australia.
In 2013, I created my first independent project, Rustic Kitchen, with the aim to offer Sydney high quality Italian style catering services, using sustainable, seasonal and local ingredients. The choice of the word “Rustic” aimed to show how Italian food can be simple and sophisticated at the same time.
It’s 2016, it was time for Rustic Kitchen to evolve, so I created I Maccheroni. My idea for this new boutique style restaurant, which I also use as cooking school, is to show and pass on the knowledge of authentic Italian tastes and traditions, as well as an awareness in the choice of local and seasonal ingredients.
Have you always wanted to be a Chef?
My Mum was a very good cook, so I’ve always been interested in food. As a teenager I decided to follow agriculture related studies because I always was interested in the environment and nature. When I finished high school, I decided to work on the business side of my profile by studying Psychology of business and work organisation, with a little bit of advertising added in. While I studied, I started working in hospitality, as many people do and I became interested in what was happening in the kitchen. One night I started working as a kitchen hand in a local trattoria and I quickly understood that was the environment I wanted to work in, so I soon enrolled at ALMA cooking schoool by Gualtiero Marchesi.
How would you define your style?
A mix of classic and modern techniques to get the best out of traditional recipes using fresh, local and seasonal produce.
What is your feature flavour these days?
Basil and Majoram.
Obsessive compulsive about?
Order in the kitchen!
Your greatest culinary inspirations/influences:
Gianni d'Amato and Alfonso Iaccarino.
What do you love about this business?
The constant contact, interaction and feedback from people. The possibility of playing with the ingredients and the seasons.
An ingredient you can’t life without?
Flour!
Most ‘eyebrow raising’ menu item?
Maccheroni!
Signature dish:
Spinach and Reggiano Tortelli with burnt butter. 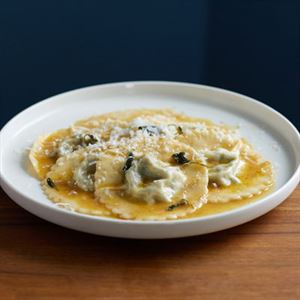 Offering traditional Italian dining and an exclusive vibe, I Maccheroni on Jersey Road in Woollahra draws visitors from near and far to enjoy an authentically styled experience. Charming rusticity abounds inside with timber furniture and walls accented with navy cushioned seating and dark racks overflowing with an extensive selection of wines, creating an intimate ambience for romantic dining. Michelin star trained Chef, Marcello Farioli pairs classic Italian recipes and local produce in a modern, yet authentically effortless menu. Delve into starting dishes such as anchovies, Stracciatella and garlic bread, or parma prosciutto, piadina and stracchino; before a main affair like scialatielli, vongole, crab, garlic and chilli, finishing with delicious ricotta tiramisu and hazelnut crumbs.