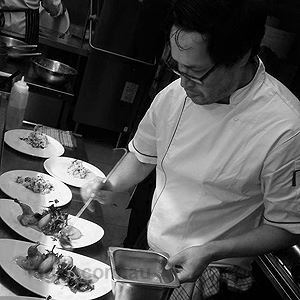 Born:
Auckland, New Zealand.
History:
I trained in the Royal New Zealand Navy and from there I worked in Auckland’s premiere dining precincts, Ponsonby and The Viaduct, during 2000 The Americas Cup. From there I went on to work for some of New Zealand’s better known Chefs including Michael James, Simon Gault and Rex Morgan. During the early 2000’s, I worked at elite venues such as Kauri Cliffs, Huka Lodge and Dawsons which prepared me for my move here to Australia, where I’ve worked at Mirka In St Kilda, O’Connells in South Melbourne and My Mexican Cousin in Southbank, I’m now sharing all I’ve learnt through the years at the classy Chez Restaurant in Balwyn.
Have you always wanted to be a Chef?
Yes, ever since I was a young kid. I used to make cakes, breads etc and would read books and try to recreate the things I read and saw. It wasn’t until my early teens that I saw the possibility of what a ‘kitchen’ could offer. At 13, I started working at the local pub and just knew that one day I’d be a good chef. Learning throughout the years from different chefs with different techniques, I have come to develop my own flavours and interpretations of food and its flavours.
How would you define your style?
Having trained in French cooking techniques and being of Maori heritage, I’d say French with a Kiwi touch.
What is your feature flavour these days?
Lately, I am really into slow cooking and drawing out as much of the flavour as possible.
Obsessive compulsive about?
As the old saying goes “A place for everything and everything in its place.”
Your greatest culinary inspirations/influence:
Paul Bocuse, Thomas Keller, Anthony Bourdain, Rene Redzepi and Alain Ducasse.
What do you love about this business?
I love that feeling after a busy service when you know every plate of food has gone out to the customer as perfect as can be and everyone has left happy…it’s almost like an addiction.
An ingredient you can’t live without?
Butter, as simple as it might be, to me it is one of those ingredients that lends itself to everything it touches.
Most ‘eyebrow raising’ menu item?
Ox Tail with white miso turnip, artichoke and tea gel.
Signature dish:
Abalone, Pork belly, fennel and jus.
Back to Top