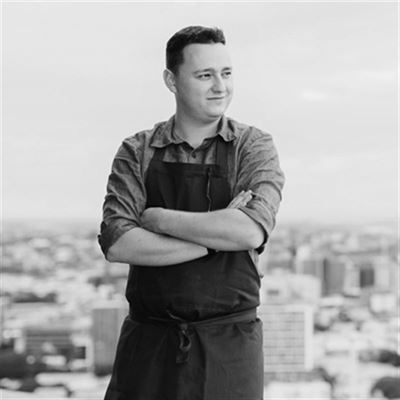 Born:
Melbourne, Victoria.
My Story:
I started in hospitality at age 15 while living in Sydney, working weekends at a local café in Summer Hill while at school. When my family moved to Brisbane in 2013, I landed a role with a chef who focussed on "back to basics” cooking, baking fresh breads and pastries daily. Concentrating on simplistic food that was all about the produce and flavour. This was a pivotal moment in my career, starting my obsession with simplistic cooking that didn’t confuse the palate.
Late 2014 saw me move to Melbourne where he spent two years working in a number of highly regarded restaurants and wineries before taking up my first Head Chef position in Malvern at a new wine bar. It is here where I fell in love with the idea of local, seasonal and sustainable produce, with most of the menu having items sourced from the Yarra Valley, Great Ocean Road and smaller cheese makers.
Moving back to Brisbane during 2016 and wanting the freedom to express himself and not be constrained by people’s ideas of fine dining, I followed the pop-up path and decided to reignite interest in fine dining by removing the stuffy feel that it had become to be known for. Designing my first menu by the rule ‘less is more’ and looking to South East Queensland for inspiration, I opened doors for the first Pop-Up which was an overwhelming success with all tickets sold in just two weeks.
As the pop-ups have grown and seasons have changed, my team and I are looking forward to the future, searching for new and exciting native ingredients to share with Brisbane diners.
Have you always wanted to be a Chef?
Being a Chef wasn’t a career I really thought about growing up, but I always had a great love and passion for food and cooking that stemmed from my childhood, so it was a profession that I kind of fell into and have embraced since.
How would you define your style?
My style is all about simplicity and allowing the produce to speak for itself. I take a lot of care in where I source my produce from and try to keep to three rules; local, seasonal and sustainable.
Obsessive Compulsive About?
About many things really but I’d mainly say order and cleanliness.
Your greatest culinary inspirations/influences:
Hands down my greatest influence is my Grandmother. I have so many great memories as a child getting in the kitchen with her and cooking all the traditional Hungarian dishes that she grew up on during the war.
Most "eyebrow raising” menu item?
Tough one as my menu is forever developing and you’ll never see the same dish twice. Most recently it would have to be the native fruit, Lemon Aspen.
Signature Dish:
Black Ox isn’t really known for one signature dish, but more for our degustation. Here you will find an ever developing tasting menu that focuses heavily on the local environment and the sustainability of the produce.

Brisbane pop-up restaurant Black Ox Dining brings a paddock to plate philosophy to their degustation dinner fare. With a semi-permanent location at Paddington Substation on Enoggera Terrace, Black Ox can also be found at various other venues around the city, sharing some of the best produce and seasonable, sustainable ingredients from local farmers and fishermen, with their guests. Salivate over a six or eight-course degustation menu with starters like dry-aged kingfish, compressed cucamelon, rhubarb and cranberry hibiscus, or crispy chicken skin and goats’ ricotta. Delve into wild boar, fermented mushrooms and riberries, paired with potatoes, orange thyme cream and trout roe; before an enticing dessert of caramelised parsnip, fermented blueberries, yeast lees and pineapple sage.