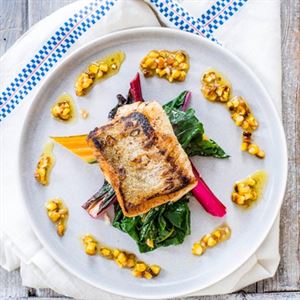 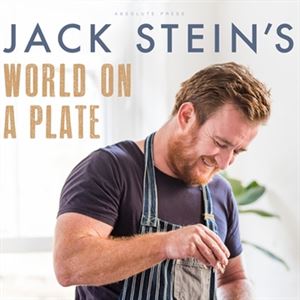 "I developed this dish after Ross, the farmer who supplies our restaurants, said he'd planted a lot of rainbow chard. The cod is sweet and flaky, the chard is earthy and the sweetcorn dressing has lots of savoury notes to complement the sweetness of the fish. Charring the sweetcorn gives extra depth of flavour, so either use a blowtorch or just chuck it under the grill. This dish looks as pretty as a picture." - Jack Stein.

4 cod fillets with skin on (180g each)
2 tsp sea salt, plus more as needed
30 ml vegetable oil
A knob of butter
200 g chard, cut diagonally
A drizzle of olive oil

Season the cod fillets with sea salt. Heat the vegetable oil in a non-stick frying pan to a medium heat and cook the fillets skin side down for 2–3 minutes until the tops of the fillets begin to change to white in colour (this method allows the skin to brown slowly). Add a knob of butter to the pan, flip the fish, turn off the heat and leave the fillets to finish cooking in the residual heat. Check the temperature with a probe; it should read 50ºC. Once the fillets have reached this temperature, remove them from the pan and leave to rest. Do not clean the pan; set it aside to use later.

Meanwhile, make the corn vinaigrette. Husk the sweetcorn and cut the kernels from the cobs. Place the kernels in a bowl, along with the sunflower oil and 1 teaspoon salt, and toss to coat. Transfer to a baking tray, place under a hot grill, on the middle shelf, and grill for about 15 minutes, turning occasionally, until the kernels start to blacken. (Or use a blowtorch for this.)

Place the minced shallot in a bowl. Add the mustard, thyme, cider vinegar, extra-virgin olive oil, garam masala and soy sauce, and stir together. Then add the charred sweetcorn to the mixture and stir. Set the vinaigrette aside.

Put the pan used to cook the fish back on the heat. Deglaze the pan with 2 tablespoons water, then add the corn vinaigrette to warm it up. It should take 1 minute.

Place the chard leaves in a saucepan along with water to a depth of 5cm. Cover the pan with a lid and steam the chard over a high heat for 1 minute. Once wilted, add salt and olive oil to taste. Remove from the heat.

Divide the chard among 4 plates, dress it with the vinaigrette and place the cod fillets on top.

Credits: Jack Stein’s World On A Plate by Jack Stein is published by Absolute Press ($45.00) Out now! 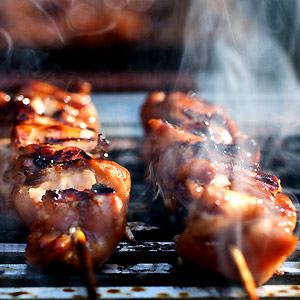 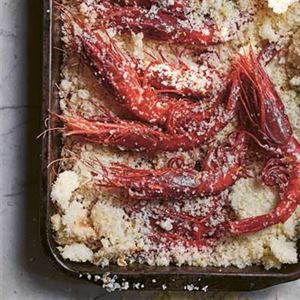 Prawns Baked in Salt with Mango, Chilli and Coriander Salsa

The chilli used in this dish perfectly balances the sweetness of the fruit and shellfish. Carabin... 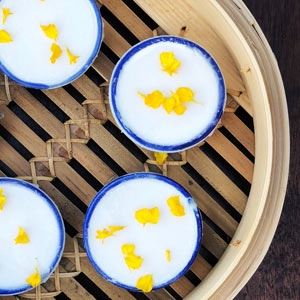