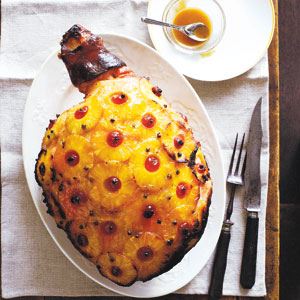 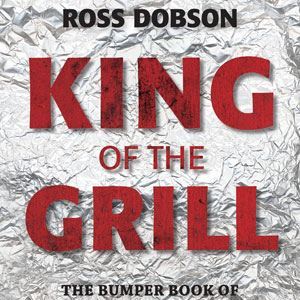 Drain the pineapple and measure the liquid. You will need 500mL (2 cups) of liquid. If you don’t have enough pineapple juice, make up the rest with water or orange juice. Slice each pineapple ring through the centre to give two thinner rings.

Put the juice in a frying pan with the sugar and mustard and cook over medium heat, stirring, until the sugar dissolves. Boil for 5 minutes so the liquid thickens a little.

Add the rings and toss them to coat in the juice, then cook for 5 minutes so the rings darken just a little. Set aside to cool.

Pre-heat all the barbeque burners to medium, with the lid on to create a hot-oven effect.

To remove the skin from the ham, cut a line through the thick rind a few centimetres from the shank end with a sharp knife. Run your thumb around the edge and carefully pull back the skin, leaving the fat on the leg. When the skin is removed, lightly score the fat in a diamond pattern (if you score too deeply the fat will fall off during the cooking process).

Start to arrange the pineapple rings on the fat, starting at the shank end. Secure the rings with one or two cloves then secure a glacé cherry in the centre of each ring with a clove. Repeat so the ham is covered all over with the pineapple and cherries.

Half fill a large roasting tray with water. Sit the ham on a cooking rack and sit this on top of the tray. Brush some of the pineapple glaze over the ham and put on the barbecue. Cover with the lid.

Now you simply have to cook the ham until it looks good. This will take about 1 to 2 hours, brushing more glaze over the ham every 20 minutes or so and making sure the water doesn’t dry out, until the pineapple rings are almost dark caramel in colour and some of the fat and juices of the ham have dripped down forming toffee stalactites around the sides.

Allow to rest for 30 minutes before carving. 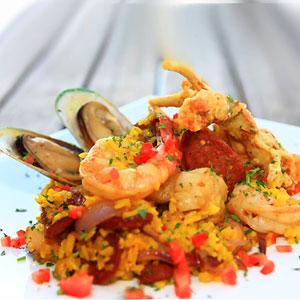 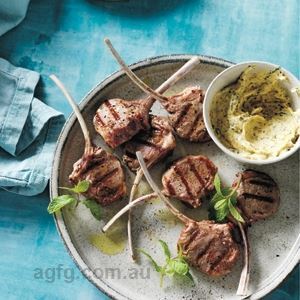 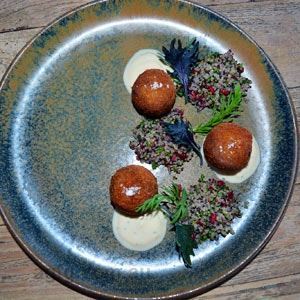