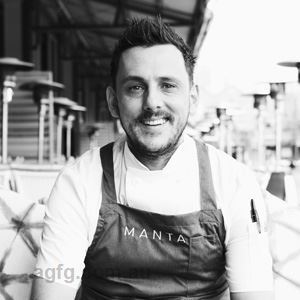 Born in North Ryde, Steve began cooking for his family at the age of nine. He pursued his passion for formal training through TAFE where he was awarded apprentice of the year and placed 3rd in the Nestle Golden Chefs Hat awards in 2004. Steve continued his learning at various venues, including esteemed Sydney restaurant, Aria.
Steve joined Manta as Chef de partie and has worked passionately alongside the Executive Chef, Daniel Hughes. Steve has always been forward thinking with his menu choices and after Manta’s full refurbishment, his fresh approach to Manta’s menu sees the appointment as Head Chef as a much deserved one.
Manta pride themselves on their commitment to using sustainably caught, local produce, and it’s a testament to the level of freshness the restaurant upholds.
“This has influenced my style of cooking as I always aim to treat produce with respect. Letting the fresh produce shine in a dish. Not smothering things in rich sauces. Always looking for balance of textures, acid, protein and fat in a dish,” says Steve.
The harbour side restaurant has always placed primary importance on the quality of their meat and seafood ensuring the source is always traceable. Manta’s beef is farmed from the owner, Rob Rubis’ family property in Texas QLD proving relationships are tight to the source.
With the implementation of a new menu style, unique techniques and flavour combinations are at the forefront of any new dish.
“I enjoy using different preparation and cooking techniques to get the most out of the initial ingredient. I love starting with a carrot and doing a puree, a pickle, a roast and raw - really showcasing how much you can get out of such a humble ingredient,” says Steve.
Steve believes the cuisine of Modern Australian is the most interesting.
“It’s my favourite cuisine to cook because it allows such diversity in flavours and styles. Multicultural cuisines combined with Australia's amazing produce means flavours are added to form a very interesting menu,” says Steve.
Steve discusses the evolution of cooking by embracing social media to expose his talent via @chef.stevehetherington.
“I think Instagram is a wonderful tool for chefs, a great digital portfolio of your work. It’s a constant source of inspiration for food ideas, plating and produce from all around the world,” says Steve. 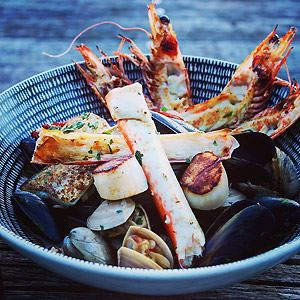