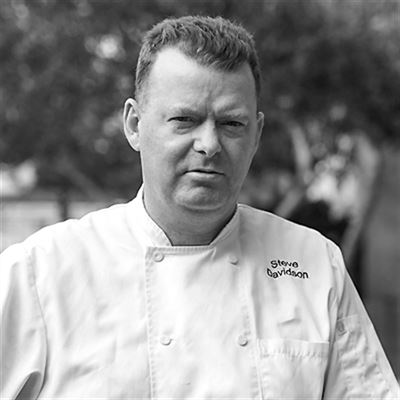 Great Britain.
History:
I started cooking as a 16-year-old travelling to London everyday in the rain! I wanted to qualify and travel the world with my new-found skills.
I learned to cook professionally and became a qualified chef at Westminster College, London (same as Jamie Oliver.) In 1989 I began as an apprentice Chef at Grosvenor House Hotel, Park Lane – a 5-star hotel and a Michelin starred restaurant.
Quickly I realised how much I loved to work in the kitchen and was determined to seek out all the challenges I could to become the best Chef I could be.
I moved to the biggest restaurant in London, Quaglino’s, and I also worked at Michelin starred Roscoff Restaurant in Belfast, Northern Ireland.
In 1994, I decided to travel to Australia, where I met my wife Julie. I worked as a Sous Chef at Breezes Restaurant in Crown Casino. In 1998 we spent a year in Bermuda, where I worked as Head Chef at Sonesta Beach Resort.
Since December 1998, we have lived on the beautiful Mornington Peninsula, working at some of the top restaurants, and helping to achieve multiple Chef Hats, firstly at Arthur’s Seat Restaurant in 1999, 2000 and 2001.
From 2002 to 2007 I was Executive Chef at the Vines of Red Hill restaurant, winning an Age Good Food Guide Chef Hat in 2005, 2006 and 2007, as well as a golden plate winner.
I also won an Age Good Food Guide Chef Hat in 2008 at Middle Brighton Bath’s Restaurant, but I preferred to come back to the Mornington Peninsula to work, rather than travelling to Melbourne.
Have you always wanted to be a Chef?
Yes. My Mum was a terrible cook, so I thought I had to learn, so I enrolled to qualify as a Chef at Westminster College, London. Immediately I knew the industry was pulling me in, so for 25 years now, I still love it.
How would you define your style?
I do love the purity of food, let the ingredient sing, so I would say my style is confidently restrained.
What is your feature flavour these days?
I love sage and always will.
Obsessive-compulsive about?
Taste, taste, taste.
Your greatest culinary influences:
All the Chefs that I have chosen to work with and I love the classics, Marco Pierre White, Jamie Oliver and Gordon Ramsay.
What do you love about this business?
The positive energy and the busy vibe.
An ingredient you can’t live without?
Salt.
Most ‘eyebrow-raising’ menu item?
Chicken skins with scallop tartare, apple ketchup and young celery leaves.
Signature dish:
I don't currently have one as my menu at Mr Morce is always evolving.