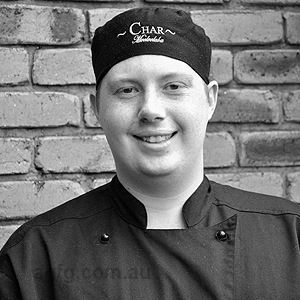 I grew up in a small country town on the North West Slopes and Plains. I started cooking with my Grandmother at a very young age and was able to experiment with whatever interested me in the kitchen. Throughout my time in Wee Waa NSW I had the privilege to work with different cuisines such as fresh pizzas, BBQ ribs and Asian food just to name a few.

I started my apprenticeship at the Imperial Hotel Wee Waa NSW. While I was there, I learnt a lot of basics and after 2 years at the Imperial, I felt that I had reached the limit of experience and skills that were available to me and, therefore, I moved up to QLD to expand my culinary skills. Once I arrived I finished my apprenticeship at Palmwoods Hotel where I learnt a saying which I still find humorous today, “the difference between a chef and a cook, is that a chef doesn’t burn the bottom of the pan.”

After qualifying as a chef I got offered a commis chef position at the Hilton Hotel in Brisbane. While working at this large hotel, I worked in numerous locations and sections, some were assisting Banquets, Cold Larder, Pastry, Breakfast, In Room dining and The Vintage Bar and Grill. I learnt a lot from these various areas. Within 16 months I was promoted to Demi Chef where I looked after the morning team as well as functions and on the executive floor.

Moving on from the Hilton, I have secured a position as a Sous Chef at an up market Steak and Seafood Restaurant called Char Mooloolaba, where everything is prepared and made fresh on site.

Death by Chocolate also known as Choc Passion Delight.
Back to Top