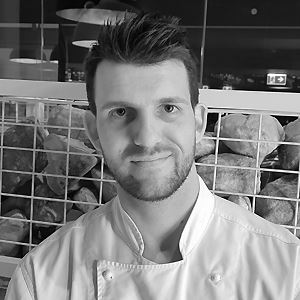 I started as an apprentice at Liverpool Catholic Club (Mercure). A year later, I moved to Twin Creek’s Golf and Country Club under Executive Head Chef Paul Hetherington. Upon completing my apprenticeship, I moved to Est. working with Executive Head Chef Peter Doyle for around a year before moving on to ‘La Tratt’ at Fairfield RSL for another 2 years. Then moving to ‘Husk and Vine’ in November 2017 under Ash Brennan quickly establishing myself as the Sous Chef. I have recently been appointed to the Head Chef role in this exciting new chapter for myself and the restaurant.

For me, what captivated me to the profession is what has been embedded into my roots from an early childhood. Every meal was a special event of preparation and experimentation, exploring different flavours and methods. To me, the family meal wasn’t just a delicious meal but a bond that brought the family together. I remember stuffing Cannelloni shells as a child and assisting my mother with other tasks, mainly clearing up, but her love for food is something that I think passively influenced my future.

Modern yet hearty. I like to use a lot of fine dining elements in traditional cooking styles to design dishes that take the best from both worlds while taking customers on a food journey.

Chilli. Infusing it into oils, cooking it into sauces, slicing it and eating it raw. I just can’t get enough.

Staff welfare is a big thing for me. My Mum looked after me in the kitchen when I was starting out as a child and her approach really resonates in my perceived management style. But when we are full pump on the pass I’m all over presentation and consistency, it’s important to me that each dish that is served is as delicious as the first one I created.

Working under Peter Doyle was a dream come true. While I am a fan of many big Chefs I draw a lot of inspirations from the Chefs I’ve been fortunate enough to work alongside in my kitchen adventures.

The staff, especially the kitchen brigade are amazing and can always be depended on in a tough situation.