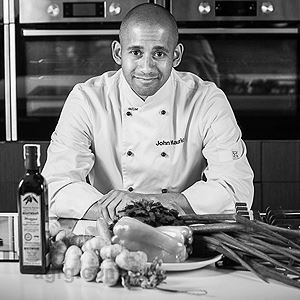 I started my apprenticeship in 2002 at The Grand Hyatt and completed it in 2005 at The Royal Hotel. After my apprenticeship, I undertook training and professional development at Vue de monde, Gingerboy and Spice Market. In 2006, I became a subcontracted, private chef and worked in a number of venues, commercial and private kitchens across Melbourne. My main clients were Luv a duck, Jamie Oliver Ministry of Food, Comme, The Point Albert Park, The Windsor Hotel, Bellota Wine Bar and The Westin Hotel.

In January of 2014, I changed my path. I started a pop-up Mauritian inspired street food stall at The Testing Ground and began Mauritian degustation dinners at Luv a duck. By 2015 I opened up my own restaurant on Lonsdale Street located inside the Lobby of the Oaks Hotel, aptly named “Creole Kitchen Lobby.” It’s a Mauritian inspired espresso bar, offering local and seasonal produce with a Mauritian twist and incorporating house made flatbreads with slow cooked fillings and Mauritian inspired pastries.
Have you always wanted to be a Chef?
I had always enjoyed being around the kitchen watching my mother and father cook, the smells and combinations of the spices would always intrigue me. They both cooked very differently, as my mother had a Creole influence to her food of a rich French style, and my father had an Asian/ Middle Eastern influence. At an early age I was involved in running the family farm in the Grampians, where I helped maintain the fruit orchard and looked after livestock. This gave me an understanding and respect for fresh produce, how it’s grown and where it comes from. The idea of wanting to become a chef came later when I started helping out a friend in a local café / fish and chip shop. I found myself at home in the kitchen and when I undertook my apprenticeship, I never looked back.
How would you define your style?
I like to cook using classical European methods, seasonal produce and combining Mauritian flavours and incluences. I have a thirst for knowledge about Mauritian cuisine, cooking techniques and spices as it’s a naturally well-balanced fusion cuisine, full of bold fresh flavours and it fits in well with our Modern Australian food culture.

Obsessive compulsive about?
Seasoning and tasting everything I cook.

Your greatest culinary inspirations/influences:
My family, Paul Bocuse, Alain Ducasse and Ferran Adria, as well as Michael Burns, my culinary school teacher, who taught me a respect for the use of proper cooking techniques and the importance of using fresh produce.

The ability to express creativity and connect with people through food.

Most ‘eyebrow raising’ menu item?
Daube de canard. It’s my twist on a classic Mauritian braise. I first created this dish for Luv a duck’s cooking school and I served this dish at my first pop-up restaurant. It captured the essence of Mauritian cuisine. The duck is braised in 14 spices, shallots, garlic, ginger, tomato, red wine and vanilla, and it’s finished with fresh coriander. Click on the link to the right and head to John’s restaurant, Creole Kitchen Lobby to find a version of this recipe!