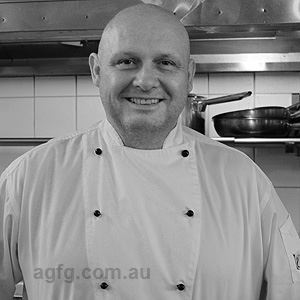 In high school my passion for cooking started. Home economics was a combination of sewing and cooking and with some persistence and persuasion to the school from my mother I was able to take a double session of cooking (I am still a below average sewer).

After completing year ten, I began my apprenticeship with Carriage House Motor Inn in Wagga, classic training in their French restaurant.

At the age of 17, I moved to Canberra to complete my apprenticeship at Rydges Lakeside. My first job was as a commi chef at Hyatt Canberra.

From 1992-2010 I started to travel around Australia and worked in various roles. From a one million acre cattle station in the Northern Territory, in the heart of Kakadu, Whitsunday Islands, Melbourne, Southern Highlands, South Coast and Hobart. I also spent some time in New Zealand.

In 2010, I was looking for a new challenge and moved in to the mining industry for 4 years, flying in and out of Brisbane. We were serving up to 10,000 meals a day.

In 2014, we decided to move the family back to my wife’s home town of Byron Bay and purchased the business, opening Nosh Pot the week before Christmas.

Modern Australian with a focus on local produce and an interest in shared dining styles.

Heston Blumenthal due to his ability to push the boundaries of food and science but mainly the chefs and colleagues that have shared my passion for food over the past 30 years.

Not on this menu, however in Darwin I created a dish of crocodile tortillas with vegemite caviar at a Native Australian Food Function in 2008.

At Nosh Pot, our signature dish has been adopted from the previous owner of Lambs Fry, it rings true to food being a place of comfort and family traditions and our customers can’t get enough.

For dinner a favourite dish is the Crab Linguini, local seafood with the warmth of chilli, fresh herbs and a light buttery finish.
Back to Top