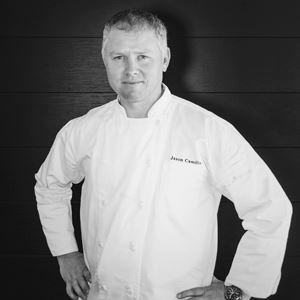 Jason Camillo, Grand Hyatt Melbourne’s Executive Chef, has had an impressive career and continues to delight guests at Collins Kitchen with his simple, authentic cuisine using only the best local produce.

Jason joined Grand Hyatt Melbourne following the hotel’s $45 million , moving across from his home state of South Australia to open the restaurant Collins Kitchen in October 2008. The restaurant set a new benchmark for hotel dining, providing a contemporary concept unlike any other in Melbourne. The open kitchen at the restaurant serves multiple food concepts, including Sushi, Deli, Grill, Wok and Patisserie.

Originally from the Barossa Valley, Jason began his culinary career with Hyatt Regency Adelaide as an apprentice close to 16 years ago. He has also spent time working at Park Hyatt Melbourne, Park Hyatt Sydney and the Adelaide Festival Centre.

Jason is dedicated to using only the best local produce – a passion that stems from his Italian heritage and upbringing in one of Australia’s food regions. This devotion ensures that each menu he designs offers outstanding quality. Jason comments, "growing up in the Barossa Valley, I have a special appreciation for locally grown produce.”

Jason is also dedicated to offering young Chefs experiences outside the kitchen. "It’s important for them to see how different foods grow, are picked, and where they come from. So many things are pre-packaged these days, so we take regular trips out to our suppliers to give our apprentices an appreciation of the process involved in creating quality .”

Jason’s personable nature lends itself perfectly to the dynamic and innovative set up of Collins Kitchen, where guests can walk through the open kitchens, view the on display, and interact with the Chefs preparing food in front of their very eyes.

He is also committed to sharing knowledge and training young Chefs. In 2007, he participated in a revolutionary program called Dreams to Reality in which young South Australians were given the chance to become an Chef.

In 2006, Jason was named South Australian Chef of the Year by the state’s Restaurant and Catering Association in their annual Awards for Excellence. He has also been awarded accolades by the prestigious Les Chaine des Rotisseurs and Les Toque Blanches.

Ever Since I was 4 or 5 I remember cooking in the kitchen of my Italian nonna preparing table of fresh gnocchi and her amazing ragu, I used to roll out the gnocchi for her and she would cut it into small, fluffy and light pieces, which to this day I have never been able to taste anything as good as hers, and from that point I wanted to be a Chef. Albeit with a few disasters along the way and my home economics teacher telling me that I would never become a Chef.

Simple basic flavours, good honest food but with a modern twist. I also love getting guests involved in playing or interacting with food and local produce.

I love a little bit of smokiness at the moment and we do a beautiful dry aged rib eye, which we lightly smoke under a glass dome prior to presenting to the guest. When the dish is presented you cannot see what is inside until the dome is lifted, revealing the .

Victorian produce and building relationships with our farmers, producers and suppliers. I love to visit the farms and see food being grown at the source. This is also a great learning tool for our apprentices leaving them skills for life.

My previous Chefs, James Fien who taught me about local produce and foraging well before it became popular. His work ethic and teamwork between of always been a cornerstone for my career. Roger Peters and Chris both of whom came to Adelaide from Michel Roux Waterside Inn and taught me how to refine my cooking and also to not be happy with mediocrity. Sometimes I produced test dishes many times before they made their way onto the menu.

The ability to create something new that no one has seen or tasted before. the amazing passion and energy generated from Chefs, service professionals and also our guests who are more educated about food and produce than ever before.

Salt, pepper and good tomatoes. Seasoning can make or break a dish and I also have tomatoes running through my veins.

We once produced a scallop ice cream, which at the time I thought was amazing but now I think about it I may have pushed the envelope a little too far.

Tartare from the Sea: Yellowfin Tuna, gochujang and radish. in our recipe section.