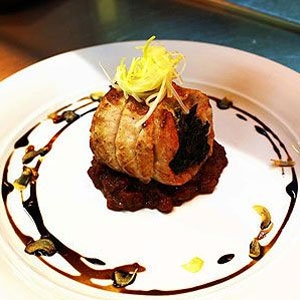 To prepare the rolled pork loin, remove any fat from the pork and lay out the pork loin as thin as possible using a fillet knife. To make marinade, put 1 peeled and cored apple, 1/2 a brown onion and 1 tbsp of yoghurt in a mixer to make a paste. Pour the marinade over the pork loin and keep in fridge for 2 hours to tenderise the meat.

Sauté spinach and mushrooms with 1 tsp of garlic mince and squeeze the stuffing as much as possible with a tea towel then season with sesame oil, salt and pepper.

While the pork is marinating, make the apple jam. Heat the saucepan with 1 tbsp of olive oil. Put 1 tbsp of garlic mince and the diced onion into the pan then cook for 2 minutes. Add the diced apples and cook for 3 minutes until apple starts to soften. Add the remaining ingredients into the pan, then simmer for 15 minutes or until sauce is thickened.

To roll the pork loin, remove any marinade from the pork and place it on a clean surface. Put the stuffing mixture along the edge of the pork loin then roll and string it tightly.

Preheat the oven to 200 degrees. Heat an ovenproof frying pan with 1 tbsp of oil and fry the pork loin, turning occasionally for 3 minutes until browned all over. Transfer the pan to the oven and roast for 8-10 minutes until just cooked through.

Reheat the apple jam and put on the middle of the plate. Remove the strings from the pork and place it on the apple jam. Form a nice circle of apple balsamic glaze around the plate and scatter the deep-fried garlic shavings on the circle. Top the pork with the julienne of leek. 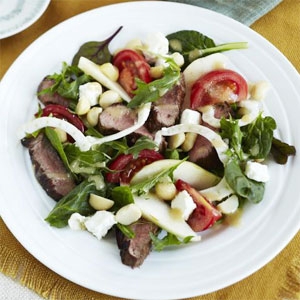 Roasted macadamias add that little extra something to this flavourful lamb salad, created by swim... 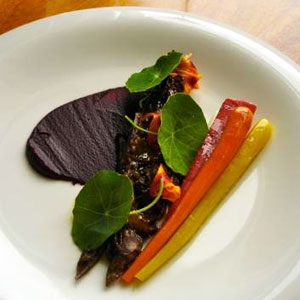 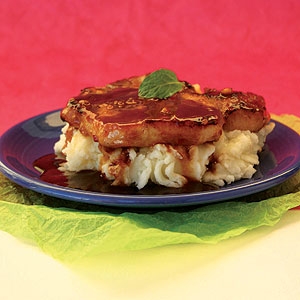 Chicken/Poultry,
Back to Top