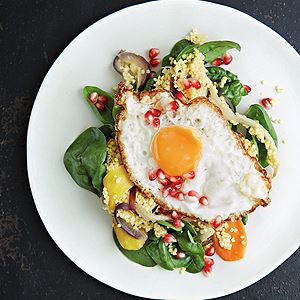 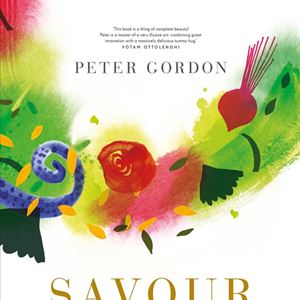 Preheat the oven to 180°C (350°F/Gas mark 4). Put the carrots, fennel, onion, garlic and chilli in a roasting dish and toss together with a little salt and pepper. Dot on three quarters of the butter and roast in the oven, turning them once or twice while they cook, until golden, about 25 minutes. Keep warm.

While the vegetables are roasting, cook the millet. Half-fill a medium pan with water and bring to the boil. Meanwhile, dry-toast the millet in a frying pan (skillet) on a medium–high heat for 3 1/2 minutes, shaking or stirring it several times to prevent it from catching. Tip the millet carefully into the boiling water and add the remaining butter and 1/2 teaspoon of salt. Cover the pan and cook on a low heat for 12 minutes. Taste a few grains: they should have a little bite. Drain the millet into a sieve, then return it to the pan, cover and keep warm.

It helps if you have a cardboard egg box to hand. Heat 7 mm (1/4 in.) of vegetable oil in two medium (or one large) frying pans (skillets) until it gives off a shimmer of heat (at about 190°C/375°C/Gas mark 5). Crack open the eggs and tip their whites into four individual cups or ramekins. Put the yolks in their half-shells back in the egg box (to keep them upright). Carefully lower the whites into the hot oil and cook until they begin to crisp on the outside edges. Using a metal spoon, carefully spoon a little hot oil over the white to make it firm a little. Lower the yolks back onto the now semi-cooked whites. Drizzle a teaspoon of hot oil over the top of the yolk to help secure it, then remove from the pan.

To serve, toss the veggies, millet and spinach together and divide among warmed plates. Sit an egg on top, scatter with the pomegranate and drizzle with olive oil. 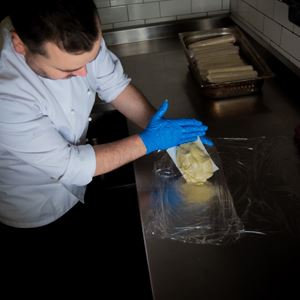 Infusing butter with truffle increases the amount of truffle flavour by 20 times! It is truly the... 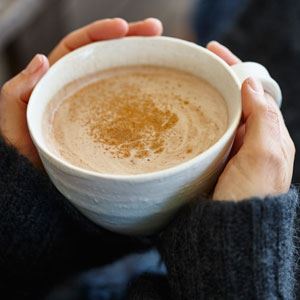 Healthy, warming, decadent and delicious on a winter afternoon or under the stars on a chilly nig... 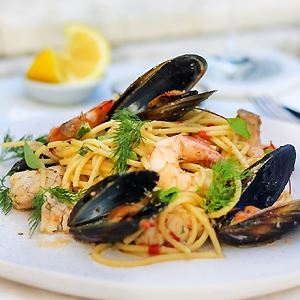