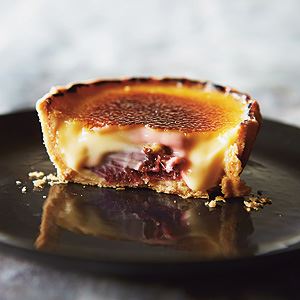 On a lightly floured surface, roll out the pastry to 3mm thick. Line the tins and trim any excess pastry. Cover with plastic wrap and rest in the freezer for at least 30 minutes.

Cut the rhubarb into 5cm lengths, place on the baking tray and sprinkle over the caster sugar. Roast for approximately 10–15 minutes, until just soft enough to take the point of a knife. Allow to cool before using. Drain well on paper towel.

To blind bake the tart cases, line the tins with pieces of crumpled baking paper and pour in some baking beads or uncooked rice or dried beans. Bake for 10–15 minutes.

Remove the paper and weights, return to the oven and bake until golden, approximately a further 10–15 minutes. Remove from the oven and allow to cool.

Place the rhubarb into the tart shells, spoon over the lemon curd and level with a palette knife. Put into the fridge until the curd sets.

Sift a thin, even layer of icing sugar over the lemon curd.

Ignite a brûlée torch and with a slow sweeping motion guide the flame over the sugar. The nozzle should be 5cm–7.5cm from the surface. The sugar will melt slowly at first then caramelise. Serve immediately

Sift the flour, sugar and salt into the bowl of an electric mixer fitted with a paddle attachment. Add the cold butter and mix on low speed until it resembles fine breadcrumbs.

Add the water and mix until the dough forms a ball.

Transfer the dough to a lightly floured work surface, press into a flat disc, then wrap in plastic wrap. Refrigerate for 30–60 minutes before using.

In a large heatproof bowl, whisk together the lemon juice, whole eggs and egg yolks, caster sugar and salt until well combined. Place over a large saucepan of simmering water, and make sure the base of the bowl does not touch the water.

Hand-whisk for approximately 10–15 minutes until the mixture becomes very thick and reaches 82 C on a sugar thermometer. Remove the bowl from the saucepan.

Add the butter a little at a time, whisking after each addition and making sure the butter is fully incorporated before adding more.

Lemon curd should be pale yellow and thick.

Credits: Recipes and Images from The Cook & Baker, by Cherie Bevan and Tass Tauroa published by Murdoch Books

Photo Credits: Recipes and Images from The Cook & Baker, by Cherie Bevan and Tass Tauroa published by Murdoch Books 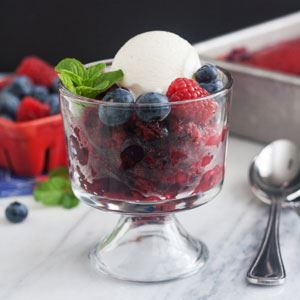 Top with scoops of ice-cream and crushed mint for a smooth, cool and refreshing finish, or dollop... 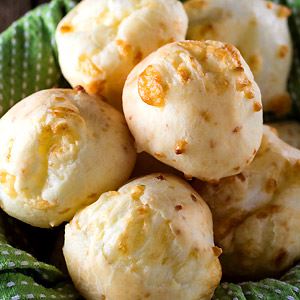 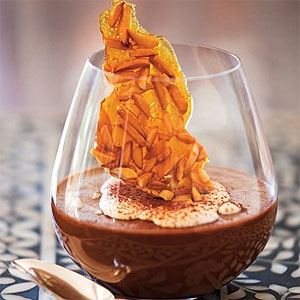 This creamy mousse with a crunchy touch is best eaten within a few hours of being made.