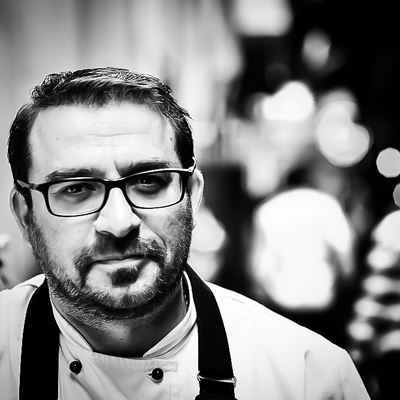 When I was still a kid, I was really close to the food preparation at our home with my mother and both grandmothers cooking traditional dishes from Greece and Constantinople. My direct influence from the world of food was when I was 11 and I started going with my father and grandfather to the central fish market in Athens, where there were a significant number of businesses, from catching the fish or seafood, to selling it to the wholesale market or retail. It was a great adventure getting to know what the ocean can offer us.

Since I was studying, I was working in my free time every evening after school at a very classic French cuisine restaurant, because it was ideal to learn more as we were studying French gastronomy and I thought it would make me more knowledgeable.

I got my first Sous Chef position when I was 19, during my army term as a navy seal, a very tough time for my family; as my father had to temporarily work in Addis Ababa, Ethiopia, which was very far from our family and he was unable to financially support us for a long time until he returned home.

I had to go through tough training in my army term and also work harder to support my mother and younger sister.

When I turned 21, I got my first Head Chef position with a lot of eyes on me expecting me to fail and go backwards when they knew my father’s health was not really the best and my mother was financially supporting the family.

After a year, my father passed away at the age of 46 and I had to go through situations that I couldn’t even yet imagine. Being a father, and a brother at the same time and working to get my family out of debt, I had to work in three restaurants a day. At one, my job was to prepare all the fish and seafood ready for service, at the next I did lunch service and I did dinner service at the one I was the Head Chef at.

For 4 years I sometimes had to sleep in my car and go back to work to learn more and to keep up with the growing food trends in Athens. For two years at the restaurant, I was the Head Chef and I was already earning enough from the three jobs to pay back all of our debt, with my mother’s help, when I decided to start my own business, something that I wanted to have for so long, but I didn’t quite know how or where to start.

After I worked in two, Michelin Star restaurants, I opened my own restaurant at 24, with business partners and I kept working as an employed Head Chef at another restaurant.

That was a great start for me, as I began creating other projects at the same time with the same business partners. Lots of hospitality venues like restaurants, cocktail bars, cafés and internet cafés.

Always working in the kitchen, I tried to create the best possible hospitality experience for my customers and learn as much as I could. Every day this is still my goal! When I learn more, it makes me a better person for others and myself.

When the financial crisis hit Greece, back in 2006, I tried to do my best, to keep up with the businesses, while working in the kitchen, as it was what I loved to do. Hard times came and I had to close most of my businesses and move to Australia, without knowing anyone here. I was alone and without a visa or sponsorship available.

Against all odds, and with a whole new world and culture to learn, I ended up starting from nothing. I worked at many businesses where they took advantage of the cheap wage of sponsorship visa work, like I fully expected, however, the brightest moment was when I met my other half, who became my wife. She is the person who supports me the most, alongside my family who still live in Greece.

After seven years in Australia, I decided to open my own restaurant. A restaurant that gives exactly what I want to give as a person and as a Chef. Hospitality! It has to be affordable because everything is so expensive, so we first understood what our customers can pay, and we give them the best possible experience.

We work hard and tomorrow it will be better for everyone. From the person who brings us the beautiful vegetables, the guy who delivers a stunning piece of meat and the freshest seafood and fish to the happiest person who is preparing it for someone to enjoy and bring a smile of satisfaction and great experience to the customer.

Hospitality is not a job or a business. It is a culture that we all should celebrate!

Yes, and always going to work in the kitchen no matter what.

Food is identical to nature; it needs only a careful touch!

Inspiration is everywhere around us; I can find it in music or even an ingredient itself.

Freshness is our signature. 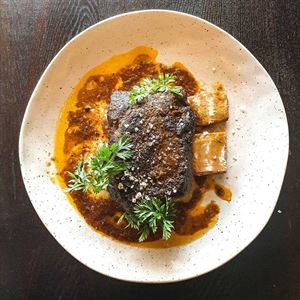 A symbol of higher wisdom, Sowl restaurant on Koornang Road in Carnegie delivers soulful and clever Mediterranean cuisine in sleek surrounds. Here, diners will meet people who care and love what they do; from pouring wine and preparing a drink to cooking and serving food, everything is done with passion. Take a seat in the moodily lit dining room, where duck egg blue walls and wooden panel accents combine to create a calm space to sip a cocktail and savour dishes like grain-fed beef short rib, cooked in preserved tomatoes and spices. Be enticed by pork Scotch fillet, crepenette and plum molasses, with sides of oven baked potatoes and vegetables; making sure to leave room for a decadent dessert of Baba au Rhum – yeast cake, swimming in rum-spiked orange syrup, layered with crème diplomat.