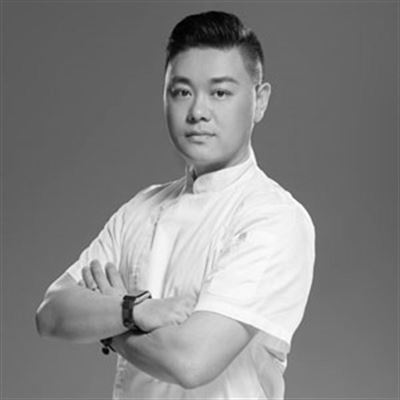 Born:
Shangahi, China.
History:
Originally from Shanghai, China, I came to Australia when I was 25-years-old. My love for food began in Sydney when I discovered the beautifully diverse selection of produce and ingredients Australia had to offer. I began my culinary studies in Sydney shortly after and gained experience working in one of Sydney’s most iconic restaurants Lucio’s as a kitchenhand.
After a few short years, I was given the opportunity to become the Sous Chef for the Merivale Establishment Hotel. Five years down the track, I was offered Head Chef roles at the Grand Hotel Sydney and the Hyatt Regency Hotel, where I spent the better most of 7 years working across these two venues.
After gaining valuable experience in the hospitality sector, I explored further opportunities with Christine Chen in 2018-2019, opening up multiple restaurants across Shanghai, China. Following the success of these ventures, we began working on another passion project called Akaiito restaurant, specialising in robatayaki and modern Japanese cuisine.
Have you always wanted to be a Chef?
Yes, I have always loved food since I was a kid. Once I moved to Sydney, it reaffirmed my passion for cooking and ambition to become a Chef. I got my first job in one of Sydney’s most iconic restaurants called Lucio’s as a kitchenhand. After seeing how culinary professionals created delicious food and also presenting them so beautifully, I knew this was a culture I wanted to be a part of.
How would you define your style?
As I grew up in Chinese culture, but learnt and trained in Australia, I would like to call my style of cooking ‘Modern Asian’.
What is your feature flavour these days?
Asian flavour with modern presentation and flair. I have taken Inspiration from Ms G’s Restaurant in Sydney, Ho Lee Fok in Hong Kong and Lee Hok Fook in Melbourne.
Obsessive-compulsive about?
I love the changing of seasons and the new seasonality of ingredients that it brings. I always want to try and complement seasonal ingredients while creating new flavours along the way.
Your greatest culinary influence:
I would say Peter Doyle from Est. and Dan Hong from ‘Mr. Wong’.
What do you love about this business?
Akaiito is our dream project between myself and owner Christine Chen; we have been planning it since 2017. Originally Christine planned to open a yakiniko-style restaurant, however the concept changed after a business trip to Sydney. I introduced her to two of my favourite Sydney restaurants Fire Door and Sokyo, which inspired us to create a new concept for Akaiito. Combining the cooking styles of both the open fire grill of Fire Door and the modern Japanese of Sokyo, it led to the birth of Akaiito Melbourne, robatayaki specialists.
An ingredient you can’t live without?
At the moment, I don’t have anything in particular, but any ingredients that is fresh and in season is always a winner for me to cook with.
Signature dish:
Robata scallops - Hervey Bay scallops, seaweed butter, yuzu and chives. 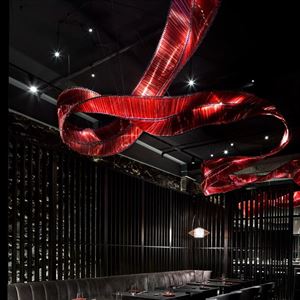 A dazzling Red Thread of Fate light fixture twists its way across the dining room pointing guests in the direction of the hidden underground bar, at Akaiito restaurant on Flinders Lane in the heart of Melbourne city. A moody vibe of black marble, dark granite and plush grey banquette seating awaits discerning diners, while the overhead red luminous thread is mirrored in the red plates on the tables. The interior is beautifully designed with Japanese elements throughout, ideal for perusing a Sentaku menu with small plates of Wagyu tataki, spicy ponzu, leek, egg yolk and garlic chips to start. Larger dishes such as Robata char-grilled kingfish collar, with apple ponzu and chives may entice, alongside sushi, sashimi and nigiri choices like salmon ceviche and soft-shell crab maki rolls.