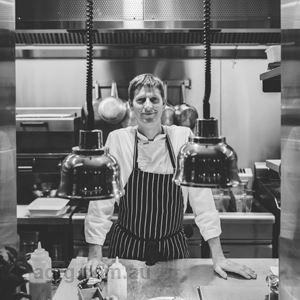 Born:
Lismore, NSW
History:
I started my apprenticeship in a busy restaurant in the Marina Mirage complex on the Gold Coast in 1996 and worked there for two years before moving onto the 4 star ParkRoyal Hotel at Darling Harbour in Sydney where I finished my apprenticeship.
I went to work at the newly refurbished Bathers Pavilion, which at the time had a 2 chef hat rating. From there I went to London for three and a half years and worked in Notting Hill, Covent Garden and Mayfair, in various restaurants.
After London, I decided to head over to Berlin where I worked for three years in Berlin’s best Italian restaurant, Bocca di Bacco, before moving onto Restaurant Horvath, which was owned and operated by former 2 Michelin Starred Chef, Wolfgang Muller.
After returning to Australia, I did some contract Chef work before deciding to open my own catering company “Mahlzeit” (German for meal time, due to my German heritage), which I operated in Brisbane for nearly 6 years. I joined the Kennigo Social House opening team as Head Chef in August 2016.
Have you always wanted to be a Chef?
Growing up, I was either going to be a Chef or a builder. Both completely different trades, but I guess both creative in their own sense. I decided to be a Chef and haven’t looked back. I love the sense of enjoyment guests get when you cook for them. Eating is such an important part of daily life, to sit together as a family or group of friends and share a meal is such an enjoyable part of life.
How would you define your style?
I’m all about utilising the freshest, seasonal produce, and where possible, I always use and support Australian farmers and supplies. I have a real respect for the producers of food as it’s such a labour intensive work that doesn’t stop for holidays or weekends! I like the quality of the ingredients to speak for themselves at their peak freshness.
What is your feature flavour these days?
As it’s Summer now, I would say a nice BBQ piece of meat, slowly cooked until it’s falling off the bone with a beautiful salad, something simple like grilled peach, prosciutto, buffalo ricotta and rocket.
Obsessive compulsive about?
Perfectionism! Not just in the kitchen either.
Your greatest culinary inspirations/influences:
I couldn’t name a single person as I think there are so many today as food style and trends have come a long way since I started cooking back in 1996. From starred Chefs to no name Chefs. Being a Chef is just such a fantastic profession to be involved in as you can always learn something new!
What do you love about this business?
I love the challenge that opening a new restaurant provides, in getting the concept going, from the initial discussion right through until the opening day and then the daily operation of it. I enjoy speaking with our guests after their meal and to see how everything was and if there was any feedback on how we can improve the experience our guests receive when dining at Kennigo Social House.
An ingredient you can’t live without?
Good bread and butter.
Most ‘eyebrow raising’ menu item?
I wouldn’t say we have any eyebrow raising menu items, but visually stunning and of course delicious, I would have to say our house cured salmon with lemon mascarpone, baby beets, asparagus and fennel or our dessert of Sunny Coast berries, Riesling foam and orange jelly.
Signature Dish:
Rhubarb almond cake, white chocolate custard and lemon curd ice cream.