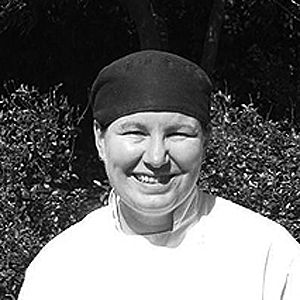 Born:  Nearby Loxton, SA
History:  Growing up in the fruit abundant district of Riverland, in the Garden Town of Loxton, Melissa often spent her school holidays picking grapes in between regular camping and fishing expeditions with her family and friends.
She grew up with a strong Cypriot influence and many a meal was spent with traditional feasts including goat, pig and lamb on the spit - always with bread, always with the family seated around the table.  Her love of Mediterranean, European and Middle Eastern cuisine has been complemented by her travels to such places as Scotland, Ireland, England, France, Cyprus, Egypt and Dubai.  She has also spent some time in New Zealand, Indonesia and Thailand.
Melissa moved to Western Australia at the age of 13 and already knew she wanted to be a chef.  At age 15 she undertook a 1 year cooking course followed by a 6 month pre-apprenticeship before beginning her formal apprenticeship in a restaurant specialising in traditional Australian cuisine. She then moved to a café in Applecross where she completed her qualification.
Working at various restaurants and cafes around Perth, Melissa eventually made the move to Margaret River. Taking up positions at places such as Driftwood Winery, Amberley Estate and Evans & Tate (where she was a Sous Chef), Melissa finally made the move to Xanadu Wines in 2007.  Her influence contributed to their 3 consecutive Gold Plate Awards in 2009, 2010 & 2011.
Melissa’s knowledge and expertise, second to none, naturally extended into a promotion at Xanadu – she’d held the position of Sous Chef for four years. At the end of November 2011, she eagerly accepted the role of Head Chef at Xanadu, bringing with her an abundance of fresh and exciting new ideas for upcoming menus.
As Head Chef, Melissa enjoys the freedom her new position allows, being able to play with food and constantly coming up with menu ideas in her head.  She enjoys not having to worry about what other people think and the feedback all around has been extremely positive.
Have you always wanted to be a Chef?
Both my Dad and stepfather were cooks and great influences on my early desire to be a chef.  On the domestic side of things, Dad cooked because he had to, bringing up two kids; we lived a Greek lifestyle that included big family Christmases and I grew up watching him cook stews on the barbie.
Whatever Dad was cooking, I’d try to get involved with it.  He was a master of braises and BBQ foods.  My stepfather was a chef in the navy, so he was professionally trained on a totally different level; from both of them, I came to understand cooking from two different sides.
How would you define your style?
My style is very Mediterranean though these days I’m really inspired by Middle Eastern cuisine.  I also have considerable Asian influences, but would never define that as my “style” per se because there’s a lot to it that I don’t completely understand.
Your greatest culinary influences?
My paternal grandfather was a huge influence on me.  He was the main cook and #1 barbecuer at family functions, and then Dad eventually took over.  In the industry, I highly regard Christine Mansfield for her versatility and international prowess – not to mention, I love her food.
Obsessive compulsive about?
Things not being put away.  When things aren’t put back in their place you can never find them again.
What is your feature ingredient these days?
Yogurt.  In dishes such as an almond crumble, maple & yoghurt panna cotta dessert with strawberry, sumac & basil salad; or in sides, as in the yogurt and tahini accompaniment to one of my Mediterranean entrees. I’m really into yoghurt right now so it’s playing a big role in my planning.  Funny because I don’t typically eat a lot of yogurt in my diet, it just kind of turned up.  Otherwise, my menus are planned around seasonal produce and I never use frozen foods.
What is your favourite season?
Winter, to be honest.  I adore comfort food and really get into peasant-style dishes associated with the cooler months.  This is when we see braises and roasts and I embrace the opportunity to put a new spin on old hearty dishes, serving them restaurant style.  For example, from a classic pea and ham soup recipe that I had emerged a pasta dish featuring braised pork and apple pasta with peas, mint & feta topped with crispy pork.
Ingredient you can’t live without?
Garlic, lemon, potato… bread, a nice crusty loaf.  And cheese.  Definitely cheese.
Most “eyebrow raising” menu item?
The confit salmon tarator with pomegranate, burghul salad and salted cucumber has come out really well.
Signature Dish: I always have a cheese course on that’s a little bit different, this way we can creatively appease cheese lovers without having to conform to the classic cheese plate spread (though it's available on request).  In designing the cheese course, I feature one cheese and balance sweet and savoury elements throughout the dish on a whole; an example is our cheese soufflé with caramel popcorn.   With the soufflé, it’s listed as a dessert though it could easily be an entrée as well.  And desserts are a signature, full stop.
Overall, how is life as Xanadu’s Head Chef treating you?
The positive feedback keeps coming in, and the experience is truly rewarding because people keep enjoying my food, day in and day out.   As long as customers keep enjoying my food, I’ll enjoy cooking it.  Another plus to this job is having my menu paired with wines, mostly with our own Xanadu varietals – you can’t go wrong with the salmon matched with our Chardonnay. 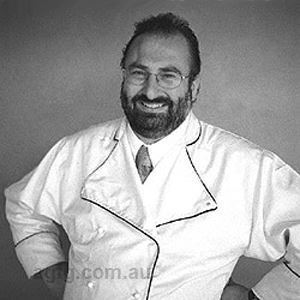