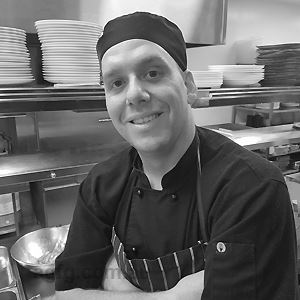 I began my apprenticeship in my home town of Charters Towers, before moving to Townsville in 2004. After finishing my apprenticeship at Jupiters Casino (now The Star) on the Gold Coast, I set off on a working holiday around Australia; working three ski seasons on Mt Buller in Victoria’s high country. Summers were spent at the Cradle Mountain Chateau in Tasmania, and I also did a small stint in Darwin before moving back to Townsville at the end of 2009.

I started my role at Brothers Leagues Club as a Sous Chef in 2010, before being promoted to the Executive Chef position in 2011.

During that time, I’ve been lucky enough to be nominated for the club’s Queensland Chef of the Year twice, finishing runner up in 2016.

Yes! As a kid I was always in the kitchen cooking for the family. I started working in kitchens before I left high school.

I wouldn’t say I really have a set style. Working in a bistro each menu item has its own style, we also hold a wine and beer event dinner which is completely different from our bistro menu.

I love chipotle pepper in adobo sauce, I recently even put them in a dessert!

As an apprentice, local Chefs, Don Haddon and Gimmi Menel gave me my start, I would not be where I am today without their help. Recently, Chefs like Rick Bayless and Anthony Bourdain give me a lot of inspiration.

I love the theatre of the kitchen, the people, the different characters and the rush you get before a 350-night service.

Butter, and of course salt.

I did a blue cheese ice cream recently.

Popcorn pork belly, nothing special, but it’s what I get asked about the most, and I don’t think I could ever take it off the menu.