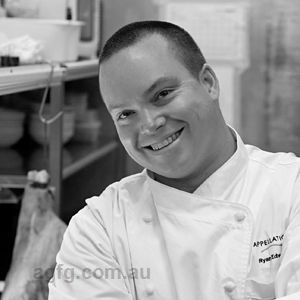 Ryan Edwards grew up on a small vineyard in the Barossa. He was always good with his hands, and had dreams of becoming an engineer, only to learn that engineers sit on their bums all day doing maths and drawing pictures.  While studying, Ryan worked in the cafes of North Adelaide paying his way through University - short order cooking, making pizzas, whatever was needed.  He was drawn to the instant gratification of modern cooking, finding it very rewarding, and somewhat addictive.
In his last year of engineering, Ryan decided to take a break.  For four years he worked in the café every day he had off of University.  So he took a few weeks off and went to Regency TAFE to do the prevoc course, then left for Far North Queensland five months later to work in a seafood restaurant.  He then worked on the Gold Coast at a restaurant at Burly Point doing huge numbers for breakfast and lunch and slamming out "Modern Australian” cuisine. He was drawn home to the Barossa where he worked at Krondorf Road Café at Kabminye Winery where he learnt to slow down, make wood oven bread, preserve figs and quinces, and keep some valuable traditions alive.
"I was once told that to go forward, you must go back, so I have studied the old church cookbooks, the history of the Barossa, the history of the family who owned our farm before us.  A lot of cooks these days want to dip stuff in liquid nitrogen, freeze dry everything, and cook meat in bags.  I want to know why and how to preserve my apricots at the peak of season so they will last all year, make dill gherkins, make cheese and butter from milk and know how to keep the one pig on the farm for a whole year of sausage, ham and bacon.  I want my team to be able to tell you how to prune an apple tree, how to treat different apples at their peak and how the make cider.  The best thing about working at Appellation is it is never boring.  The seasons change day by day, what’s at peak condition today you don’t have tomorrow.  The quest for knowledge is a never ending one, and we have the opportunity to engage as much as we like.”
Ryan’s approach to cooking is simple, put the effort in early and the rest will take care of itself. Spend the time looking for the best quality ingredients, and treat them simply, the results will always be good.
Back to Top