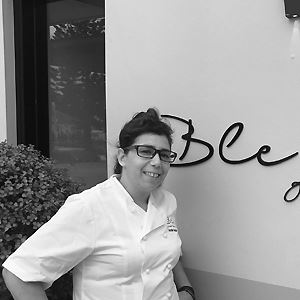 I began cooking when I was 14, during my Summer holidays. From age 15 to 18, I worked at my family’s business, before I started studying to become a qualified Chef. While I was studying, I used to work in a very big restaurant and by my second year, I was in charge of one of the two kitchens the venue had.

In 2010, in my 20s, I opened my very own first business which was a catering company. In 2011, I received an invitation to work for the Hellenic Club in Sydney. Two years later, I switched across to the new Hellenic Club venture, Alpha, under Peter Conistis. During my time at Hellenic, I took charge of several different areas in the kitchen, such as pastry, and in 2016, I took charge of the Functions and Special Events at Beta Bar and Gallery until December 2017.

After all these years, I thought the time had come to own my own restaurant.

From the age of 14, I realised I wanted to be a Chef. Ever since I started cooking, I never stopped.

My style has always been modern Greek cuisine, but I always have had an appreciation for the traditional Greek kouzina.

My feature flavour that I predominantly use throughout my cooking is marjoram. It’s a very versatile herb, but it also draws back to my roots on the island of Kefalonia, where it features in many traditional dishes of my island.

I cannot work with my kitchen messy, it needs to be clean and tidy, organised and everything needs to be labelled and dated. I always want my dishes to be the same, as I strive for consistency. I like my dishes to look the same, taste the same and smell the same.

Although it sounds cliché, my father inspired me to be a Chef and to cook. He was never a qualified Chef, but he used to cook the best food for our family business.

The reason why I love this business is because it is just a pure expression and materialisation of my imagination and passion.

I believe that all of my dishes are ‘eyebrow raising.’ However, if I had to select one, it would be the Kefalonian octopus and black olive pie.

I have two signature dishes at this point in time on the menu. The first is as stated before, Kefalonian octopus and black olive pie and the second would be the lobster ravioli and a Kakavia soup. But there is more to come!