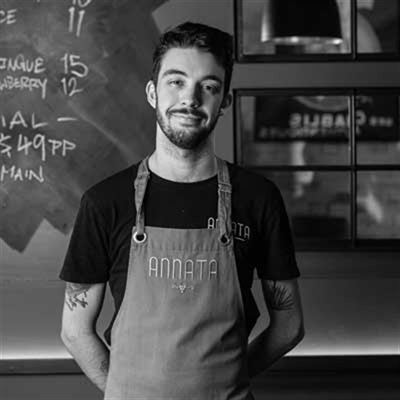 Born:
Adelaide.
History:
I started my career at a mediocre Italian restaurant on Lygon Street in Carlton - not knowing at the time that it was a low-quality knock-off trattoria (as are a lot of the places down that street). I basically applied everywhere down Lygon Street as that's where we went out for dinner when I was a kid, so I thought it was good.
From there, I gradually moved to better restaurants, slowly learning there was more to the industry than just reheated pasta and frying chips. By the final year of my apprenticeship, I felt I actually started ‘working’ in the industry and growing an appreciation for quality food and cuisine.
I spent 2 and a half years at the Carlton Wine Room where my interest in modern cuisine took hold, I read my first cookbooks from famous Chefs and spent most of my paycheck eating out.
From there I grew an interest in fine dining and began following the careers of industry-leading local and international Chefs. This led me to move on to other restaurants local and abroad.
I travelled to many great restaurant destinations including Singapore, the USA and spent extended periods in Canada and Mexico.
That eventually led me to move to Sydney and to my current restaurant home; Annata in Crows Nest, where I have been for 4 years. I feel though as with most Chefs, my past experiences/restaurants really have shaped the style of cuisine we deliver at Annata, consciously or not.
Working overseas has made me appreciate Australian working conditions and the ever availability of some of the best produce in the world which makes being a Chef much easier.
Have you always wanted to be a Chef?
I never really grew up wanting to be a Chef, it was more of a culmination of not wanting to go to uni, needing a job with little to no experience and my Mum telling me to choose something that at least gives me some form of tertiary education.
I did initially like the lifestyle but really only after a couple of years and moving to better restaurants did I really find it could be an actual career.
How would you define your style?
I think our foremost style at Annata is that of a modern European bistro. The core of the menu is very familiar in a sense but we try to steer away from being overly classic and too obvious.
The food is firstly built around the quality produce and the seasons, followed by the exploration of techniques to highlight the ingredients. I try to stay accountable by selecting local and sustainable products and maintaining the essential pillars that make good dishes.
I’m a big believer that every plate should be balanced without unnecessary additions, executable during busy services and leave a wanting for one more mouthful.
What is your feature flavour these days?
I really like heat, such as hot sauce, chillies and so on. So, there are usually always chillies and peppers throughout the menu.
Obsessive-compulsive about?
Things that are a non-negotiable to me are:
Tidy work station; good staff meals; nicely cut chives; cut tape on labels.
Your greatest culinary influence:
Hard to name one; I would say globally - Christain Puglisi from Relae, locally Dave Verheul from Town Mouse, Embla, Lesa.
What do you love about this business?
Firstly, I would say our kitchen team. We are all very close-knit, it would be hard to imagine working somewhere else without them.
Secondly, I like the neighbourhood feel of Crows Nest and Annata. I don’t love the hustle of big cities that much so it’s nice to have this little area that feels it runs at its own pace.
An ingredient you can’t live without?
Shallots!
Most ‘eyebrow-raising’ menu item?
A while back we had a dessert that had a sticky date inspired cake, but it was made with caramelised onions and chocolate.
Signature dish:
I wouldn’t say I’ve ever been enamoured with a signature dish though after the first lockdown we did have a dish that was hard to remove off the menu. It was gnocchi served in a broth made from Jamon, with burnt grapefruit and confit leeks. 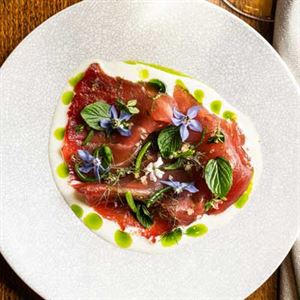 Treat yourself and loved ones to a fine dining experience north of Sydney Harbour Bridge and take to Annata restaurant and wine bar in Crows Nest, along Willoughby Road. Whether enjoying a cocktail at the bar, relaxing in the alfresco area, or dining in the chic restaurant ambience, you’ll be taken on a satisfying culinary journey of taste sensations from fresh seasonal menus. Set the scene for a memorable meal with a starter of Sydney rock oysters, lemon and mignonette, or Cape Grim beef tartare, radish, Korean flavours and ink tuille; before mains such as Black Opal rump cap, zhoug, grilled asparagus, a side of shoestring fries with togarashi and whipped soy, enjoyed with a glass of Pinot Noir. For an indulgent finish, try burnt sugar pavlova, sheep’s yoghurt sorbet and peach.