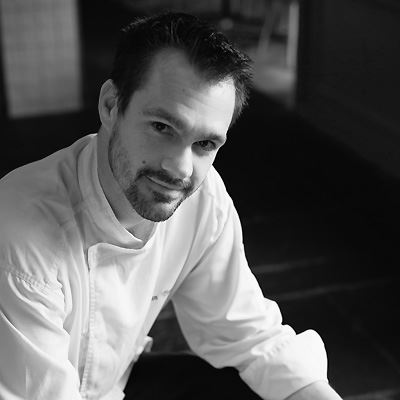 I decided to start at culinary school when I was 14. Why? Well, I grew up with my Mum and two brothers; for dinner, we had three tasks: set the table, help Mum cook and clear the table.

Very quickly, my task became cooking, as I really enjoy it. When I was 12, I baked a brownie and it turned out so well that my Mum suggested I sell it in the street that we were living in. So, the following week, I went to the shops with my Mum, bought the ingredients and the next day, I baked the brownies, portioned it and sold it. It was a success and became a regular thing!

My thinking process back then was very simple: I enjoyed baking the brownies, I made 12 kids happy and I made money. So, I decided I wanted to be a Chef.

When I approached my parents with the idea, they were not entirely sold on it as they both had come from very academic backgrounds. So, they sent me to work for one month in a fine dining restaurant, where the Chef was known to be difficult to work for. That year, I spent my Summer break working 12 hours a day, 5 days a week at the age of 13 and I love it! So, my parents enrolled me in a cooking school.

From then, I moved to Paris, studied and worked as an apprentice for 6 years, where I worked for Michelin starred Parisian Chefs such as Michel Rostang, Joel Robuchon and in such iconic restaurants as the Jules Verne on the second floor of the Eiffel Tower.

After my apprenticeship, my passion for travel sent me to places like Val Thorens, working for Jean Sulpice (2 Michelin stars), Biarritz at Hotel Ithurria (1 Michelin star), before I decided to move to Australia in 2008.

It only took me a couple of weeks to fall in love with Sydney and I decided I wanted to live here permanently. It took me almost 6 years to get my permanent residency, so in the meantime, I lived in New Zealand for 1 year and Tasmania for 2 years, before I could finally move to Sydney. I am now at the stage where I can express myself as a Head Chef at Bistro Moncur. My background working in all different kitchens, countries and with different individuals made me who I am: a happy, passionate and driven Chef.

My style of cooking is to use classic French flavour combinations and give them a modern twist playing with the textures. My main focus is on the execution, the seasoning and the consistency. Being a Head Chef is not only about just the style of cooking, but it’s also making sure the rest of the team is delivering the same quality every time. As such, training is a big part of my job, and I really enjoy it.

There are so many flavour combinations that I love but at the moment, the tarragon and brandy cream that we serve with our scallop entrée dish is my favourite, before this, it was the Lobster bisque with the crab ravioli and tarragon foam, so I guess seafood and tarragon would be my feature flavour these days. Also, I love truffle!

It’s really important for me to create a good atmosphere in the kitchen and in the overall restaurant for me and my team to work in. At the end of the day, we need to be happy to create the best dishes. It’s the same with the front of house, people say that Chefs, in general, can be very difficult to work with, arrogant, self-righteous, demanding, well, I am not!

I am aware of the mental health issues in our industry and taking the time to talk to the staff is very important to me to make sure they are in a good head space.

I love the fact that we can share our passion with our customers and deliver a memorable experience every time.

If I have to choose one ingredient, it would be salt. I know doctors say it is not good for you, but it does make the food taste better.

The snails are always an eyebrow-raising item on our menu and a go-to for our guests who want the true French experience.

The Pavlorine is a combination of the Australian Pavlova and the French Vacherin. The fresh berries, raspberry sorbet and Chantilly are served in a meringue sphere on a raspberry coulis mess. 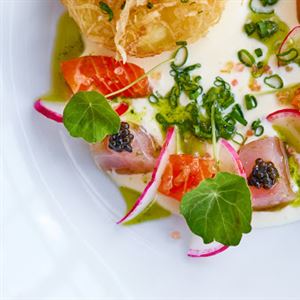