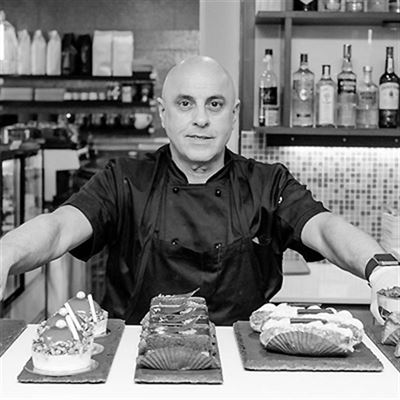 It all began when I was 12. I looked a lot older than I was, so I managed to find weekend work at a local hotel, very quickly I progressed to after-school porter duties. I liked this because I would be given tips from customers for carrying suitcases. This helped me buy cookery books and knives, at such an early age there were signs of what my profession would be.

By the time I left school, I had several jobs in restaurants, cafés and department stores. I worked and attended day release at my local catering school. Obtaining distinctions marks in all my units. With these marks, I thought I was ready to take on the world. How wrong I was!

I decided to leave home and follow my dream. I went to London. After several weeks of job hunting, I managed to get an interview at London Hilton on Park Lane, with all my positive and outstanding achievements, I thought I would be offered a top position in the kitchen. I was given a multiple-choice questionnaire regarding translating French cuisine – methods, recipes and food costings. This wasn’t my skillset! I didn’t get one answer correct.

Fast forward, I was offered a position to be at the bottom of the ladder. I was rock bottom. I decided to think positive, I couldn’t go any lower, but I would go higher up the ladder. For six months I worked around all the sections of the kitchen, eventually, I was posted to the patisserie where my life changed forever. I was then offered another apprenticeship and night school at a patisserie school. Wages were so poor and the cost of living in London was so expensive, that I made a deal with my Executive Chef Oswald Maier – he let me work double shifts so I could learn my craft in half the time.

I graduated in a year and a half. Soon after I left London, I went to work in Bahrain for three years. I was there for the opening of a new hotel. I remember the first ten weeks; I had earned more money than in my entire working career. I extended my contract and worked for another year. During this time, I met my beautiful wife.

We went back to England and opened a patisserie in my local town La’Rondine, which is still running today and is owned by my brother-in-law. Twenty years later, we find ourselves in Melbourne. I bought a franchise cake shop and ran it for nine years, before joining the head office and training new franchisees and welcoming them into the system. I purchased a factory called Frankie Patisserie where we produced cakes, biscuits and a vast amount of wedding and bespoke custom cakes. I then decided to semi-retire, until my next chapter at Casa 305.

I have always had a passion for people and food. Everything I learned I have learned from my Mother. My mother was a great cook and I would watch her from a very young age. I knew back in those days that the kitchen was my life.

I don’t have a specific style; I just love creating new things and perfecting my craft.

I currently work mostly with seasonal fruits, as they give the freshest flavours.

I hate seeing cloths on tables. That’s the first thing I tell my Chefs.

It gives me the ability to be expressive with my creativity.

I, as a pastry Chef, would not be able to live without Belgium Chocolate.