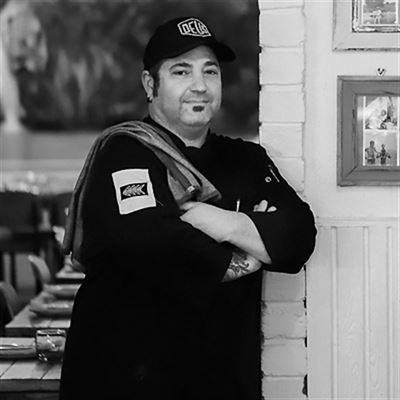 Born:
Born in Cyprus – English Father / Greek Cypriot Mother.
History:
I got my start when I was lucky enough to land an apprenticeship at Mietta’s in the late 80’s under Jacques Reymond.
After stints in the early 90’s at Marchetti, Fanny’s and Travelodge I landed my first Head Chef position in ’93 at Tony & Adriana’s ‘Rogalsky’ and ‘Locanda Veneta.’
In 1996 I finally opened my first successful restaurant in Block Arcade - Café Cortile.
After a successful run at my first restaurant I became Head Chef at Hairy Canary Spanish Tapas in 2002.
Soon after (in 2005) I opened my second restaurant in Essendon with my wife – Omni. It was a fusion of garnered knowledge with Spanish, French and Italian influences.
After the success of Omni, I decided to leave the kitchen for a while and became a sales manager at Ocean Made Seafood and later the buying and purchasing manager for Flavours Fruit & Veg.
It wasn’t long before I found myself back in the kitchen where my passion lies, as Head Chef at the Compass Group.
Today I’m living out my dream in my third restaurant, ‘Venus & Co’ where I pour my love and passion for food onto a plate.
Have you always wanted to be a Chef?
Absolutely! It all started when I started cooking on my Dad’s boat over the South China Sea.
How would you define your style?
Simple and produce-driven, with classical French, Italian, Spanish and Greek accents.
What is your feature flavour these days?
Cypriot herbs and spices, cinnamon, coriander seeds, rose, orange blossom and oregano.
Obsessive-compulsive about?
Fresh produce and correct labelling and dating of prep. Also keeping the work area clean.
Your greatest culinary influence:
My biggest influence by far has been family and the dozens and dozens of Chefs I’ve worked with over the 30+ years.
What do you love about this business?
I love that every day is different and surprising people about Cypriot food.
An ingredient you can’t live without?
Can’t live without good, natural Sea Salt.
Most ‘eyebrow-raising’ menu item?
12-hour lamb shoulder.
Signature dish:
Goat kleftiko. Provincial Greek Cypriot cuisine with a modern twist is on the menu at Venus & Co Kitchen & Bar on Victoria Avenue in Albert Park. Using recipes passed down through generations alongside fresh and contemporary dishes, this trendy restaurant brings a slice of the Aegean to Melbourne with whitewashed walls, vibrant aqua artwork and trailing greenery creating an oasis ideal for leisurely dining. Choose a table under the glow of pendent globes and begin with street corn over coals, goats' curd, halloumi crumbs and Cypriot black salt; then share 12-hour baked goat kleftiko, potatoes, lemon and goat milk feta. Room to spare? Try rose pavlova with strawberry sorbet, raspberry cream and Summer berries; while those dining in groups may opt for the Chef's choice banquet for the whole table to enjoy.