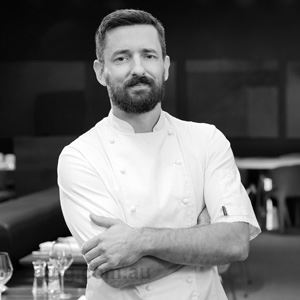 Matthew completed his formal culinary training at the Christchurch Polytechnic Institute of Technology in 1999, after having emigrated to New Zealand with his family as a teenager. He then spent the next seven years working abroad for highly regarded restaurants and hotels before permanently relocating to Australia and landing a job at famed Melbourne restaurant Vue de Monde. Two years later he made the move to Brisbane and worked briefly at Urbane before joining the opening team at ARIA Queensland as Senior Sous Chef. After four years at ARIA, Matthew took a job across the river at StokehouseQ, and was promoted to Head Chef in 2015.

Now at home in the kitchen of Hilton Brisbane, Matthew continues working to refine his craft. By always utilising the best produce available, and applying all his combined skills and experiences as well as those of his team, Matthew aims to produce dishes of a contemporary style grounded in time honoured preparations.

In high school, I was mostly interested in music and arts. I never had a lifelong desire to cook for a living or anything like that. Initially I was working as a kitchen hand to support myself, and on the busy weekends, kitchen hands were required to help out on the line. As it turns out, I felt pretty comfortable in the rush of service. I think the intensity of a busy kitchen suited me, and I seemed to have a small amount of natural ability. I kept working in kitchens, but it was actually several years later that I really started to apply myself to cooking as a career.

My menus are still very much influenced by the preparations and flavours that I learned as a young cook. I want our dishes to be contemporary of course, but also recognisable. I don’t want to challenge our guests’ palate too much, or try to impress them with an excessive show of technique. I am aiming for balanced flavours and attractive presentation using the best seasonal ingredients we can get our hands on - and then I hope that those qualities come across on the plate.

It changes with the season, and with the influence of our producers and suppliers. I am just as excited by a delicious apple, as I am by anything new that I may come across.

That’s impossible for me to list, there really are too many… There’s a wide range of cooks that inspire me from all over the world, all producing vastly different food. Some famous, some not. Then there’s all those people actually growing, or raising, or catching the food we cook. They are certainly more influential than anyone else.

I love that it’s a craft, it’s a trade. To be good you have to focus, be attentive, and get involved. You really need to get your hands dirty - so to speak - and build up those calluses. A committed cook needs to put in the hours working with, or more likely under, people more skilled than themselves. You won’t learn by watching or liking what someone else is doing. You’ve got to actually do it yourself.

I don’t have one – dishes are retired from the menu when they have run their course, which occurs for a range of reasons. Some of those same dishes or, more often, preparations are revived later on when the time suits. If it’s still relevant, and still delicious, it stays on the menu. 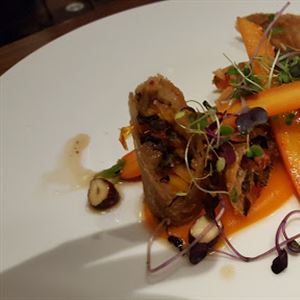