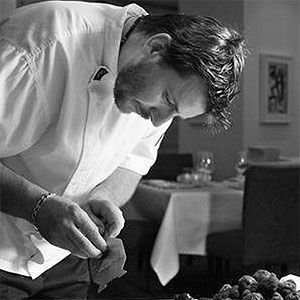 History:  Co-owner and executive chef of the acclaimed L’etoile restaurant in Sydney’s Paddington, some say Manu Feildel was destined to be a chef.  His great grandfather was a pastry chef, his grandfather and father were both chefs, and his mother brought him and his sister up on fresh home-cooked meals.  In his mid-thirties, Manu’s chef career skyrocketed including the onset of television celebrity.

A self-proclaimed entertainer at heart, Manu’s sexy French accent is now famous in Australia due to his natural propensity for showmansip.  Given the opportunity to spin off his culinary talent, Manu co-hosts Channel 7’s My Kitchen Rules (MKR) amongst other cookery programs including Channel 10’s Ready, Steady, Cook and Lifestyle Channel’s Boys Weekend.  Manu’s filming repertoire continues to expand and also includes the first season of Channel 10’s MasterChef Australia, Channel 7’s Dinner Date, and Dancing with the Stars 2011 – he won this competition.

Other developments for Manu in the busy year of 2011 included the release of his first book, “Manu’s French Kitchen”; his second Penguin Book, “Manu’s French Bistro”, followed just a year later.  In 2011 he also won Chef of the Year at GQ’s annual Men of the Year Awards and toured around the nation with the Good Food & Wine Show.  Between running his restaurant, filming, and writing books or magazine articles, Manu spends his time with proud young school-aged son, Jonti, in shared custody with his ex-wife.

Chef’s Story:  French chef Manu Feildel now calls Australia home, a story that begins in the late 90’s. After 6 months at Toofey’s in Melbourne, he moved to Sydney in 1999 and was given the opportunity to open the kitchen at Hugo’s Lounge in Kings Cross where he first met Pete Evans, with whom he co-hosts MKR.  From there he moved to hatted Restaurant VII, offering fusion French and Japanese cuisine.

Following that, Tony Bilson approached Manu to open his next kitchen venture with Radisson; that was in 2004 and Manu remained at Bilsons at the Radisson for six years, bringing it to 3 chef hat status with his contemporary French cuisine.   By 2010 Manu had stepped out of Bilsons and opened his own French restaurant, L’etoile in Paddington; he remains co-owner and executive chef of this successful restaurant to this day.

Before landing on Australian soil, Manu honed his skills in London where he worked his way up at Livebait in Waterloo before moving to the Covent Garden location.  After he became head chef, Livebait was nominated as 1998’s best seafood restaurant in the UK – following that success Manu made his big move down under.

I’ve been a chef now for over 22 years, though by now it feels longer. It is really my passion.  As a teenager I took two years of “Circus School” then at 15 went to work at my dad’s restaurant in Saint-Nazaire on France’s Atlantic coast where I was eventually on my own behind the kitchen burners at night.

Filled with enthusiasm, I enrolled in the French equivalent of TAFE and moved to Rotisserie du Palais; in my second year we worked through the complete works of the French master chef Escoffier leading up to graduation.  Upon completing my apprenticeship I travelled and began working in a famous kitchen brigade of 30 chefs at Oscar Wilde’s favourite watering hole, the historic Café Royal in London.

Read our exclusive Interview with Manu Feildel in the AGFG blog.