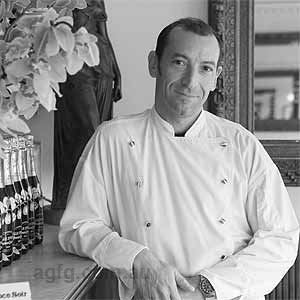 Born:
South West of France, Gascogne.
History:
I started as an apprentice in Bordeaux in 1987 at the Capon Fin 1 star Michelin restaurant. I then spent 18 months in Nice at Negresco, a 2 star Michelin restaurant.
I moved from France to the US and spent another 18 months at the 1 star Michelin Meridien.
I then moved to Bahrain to take a position at the Meridien there for one year.
Moving to London I took a position at the prestigious AW11 for another year.
Upon meeting my Australian wife, we moved to Melbourne where I began at the France Soir in 1995 and have been here ever since.
How would you define your style?
I would describe my style as fresh French modern cuisine with a touch of old school.
What is your feature flavour these days?
My feature flavour at the moment would be truffles and all fungus.
Your greatest culinary inspirations/influences:
My greatest culinary inspiration would have to be my mum. She is an amazing cook and opened a world of amazing recipes to me.
What do you love about this business?
I love the buzz in the kitchen and the amazing choice of fresh and diverse ingredients available in Australia. Plus learning new things every day is far from boring.
An ingredient you can't live without?
I cannot live without cheese. The quality here in Australia is fantastic, but I still prefer my French cheeses.
Most 'eyebrow-raising' menu item?
The three most 'eyebrow-raising' dishes on the menu at France Soir are the andouillette, pork stomach and the trou du cul. The tro du cul is a delicacy that is appreciated by quite a few Melbournians. 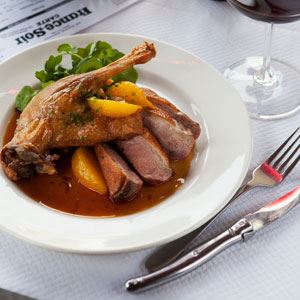