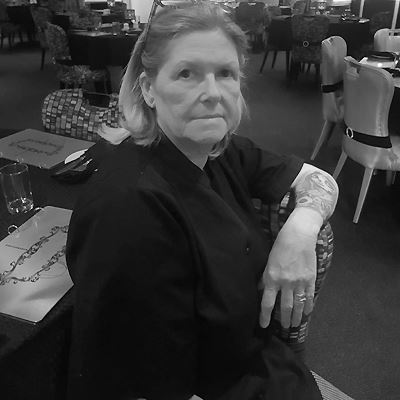 I came to Australia with my parents in 1965 from England. I was raised in Mt Waverley, Victoria, before leaving home when I was almost 15. I worked several menial jobs, and it wasn’t until I was travelling Australia in a bus, that I realised cooking was my thing!

First, in a fish café in Strahan, Tasmania, before The Pub Café in Alice Springs, where we took over the lease for a year. We then went to cattle stations in the Kimberley, where I cooked for the musters when the season was high.

We then moved to and bought a pub in the middle of nowhere, called Agnew Hotel, where I opened Gail’s Restaurant. The nearest town was 24km away, a closed mining town, and our customers where miners, truckies and the people from town on weekends. My menu was 12 pages, as it was food from all over the world: French, Chinese and Modern Australia (among others), along with a bar lunch menu, which was well received. On a Saturday/Sunday we would have anywhere up to 45 burgers on order for pick up by those working in the mine sites across the road. I did this for 8 years, before moving to Kalgoorlie in 2010, where I opened Cecilia’s on Hay Tapas Bar in 2015.

We opened with some controversy as people said I was an idiot for presenting my tapas as regular, tasty meals, that were small and varied! My main target market were middle aged people and older, like us, who didn’t want big meals anymore, especially those that had to eat small meals for medical reasons. We opened in the middle of a major economic downturn and a lot of places suffered, but since our clientele were business owners who wanted up market service and style, our offering kept us going. We had a dress code, the only ones to do so in Kalgoorlie, which again, caused controversy, but it was well received by those who wanted to dress up and go out for dinner. We have since relaxed this dress code though, to keep up with the changes in clientele.

I didn’t know I liked cooking, but it’s something I have always done. I began cooking at 7, watching my Dad make his Bolognese and at 9, I made my parents their Sunday Breakfast (English style!) I had a break after I set Mum’s kitchen on fire… haha! Which is a funny story, I had burnt the butter while I was making mushrooms… so I put the pot in the sink to put it out. My sister and I were too busy playing to notice the smoking pot by the plastic curtains over the sink. So, for a minute I thought of being a fireman!

I have always wondered why people say its so hard to cook, when my kids ate nothing but home cooked meals. Their birthdays were celebrated with their favourite dish and it was never McDonald’s or Hungry Jacks! I could have "no food” in the cupboard and still feed a family of 5 from it. I’m what I call a great "goesinit” girl – which means that I can make a dish where anything and everything goes in it.

All over the place really! It depends on my mood. I like all influences and can cook all genres. I’ve never had a style I don’t think. I have always wanted a restaurant with no menu, just tell me what you want, and I’ll make it… wouldn’t that be the dream!

I don’t really have one. I like saffron in cream, and I’m loving the mini lobster mornay I make, as the sauce is to die for! I seem to have a flair for soups and sauces, as my husband always calls me the "soup and sauce queen.”

My kitchen and how it’s set up. I have done 147 meals in 2 hours on my own in the kitchen, because I am prepped, and everything is at my hands. I have mostly worked on my own so it’s important to have everything where you need it. I go Gordan Ramsey if anyone puts my things in the wrong spot and I must look for it. Everything is on show and can be seen.

I love it when someone loves my food and goes "oh wow” when it hits the table. On quiet nights, I take food out myself, so I get to see their reactions and that makes it worth all the blood, sweat and tears I put into the job.

I have to say that critics can do my head in. If it’s not to your taste, eat something else, don’t just bang on about it! Also, people who don’t come back, just because their friend decides they didn’t have a great evening. I’m always willing to give a place three tries before I don’t go back, but you won’t find me going on about it on social media, as that is my opinion and not everyone else’s. It also tears you down and hurts, people don’t realise how it can come across as bullying, especially if you ask them over a personal message how you could do better, and you get no response.

Scallops, prawns and French lamb cutlets. They are my three signature dishes.

It’s not on my menu, but a special I do: portobello mushroom cap filled with escargot, garlic butter and truffle oil. No one ever expects that in the Goldfields.

It’s hard as I have three, but the most popular is my scallops on hollandaise. It’s chorizo slices on hollandaise with scallop and prosciutto, with an apple celery salad. Second popular is the lamb cutlets with cream, mint sauce. People will order one serve and order another straight after, as they love it so much.