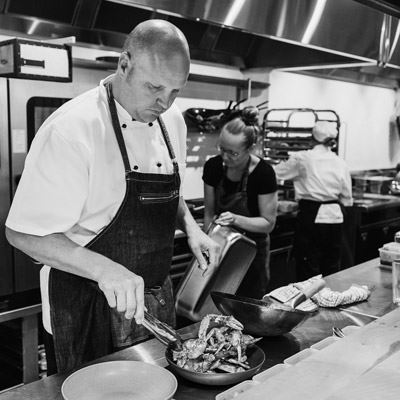 I did my apprenticeship with P&O resorts (Silky Oak’s Lodge and Dunk Island) before working my way around Australia. After doing a stint on Bedarra Island, I became a personal Chef – I was one of Keanu Reeves’s personal Chefs while he was filming the Matrix 2 & 3.

I took a job as a Chef de partie on Lizard Island as I worked my way up to Junior Sous Chef. I decided to move to the snow fields, to a little 5-star hotel called Breathtaker All Suite Hotel, where I worked for three years. I then decided it was time for the warm weather again, so I took over a restaurant in Port Douglas, called Watergate, which I ran for 3 and a half years, before moving on to a little 5-star boutique hotel called Thala Beach Resort.

My longest stint was when I moved to Dunsborough, to take over a winery called Palmer Wines, which I ran for 8 years. Now, I’ve opened my own restaurant, as of December 2017, Blue Manna Bistro is my current home.

I have always wanted to be a Chef, and I enjoy the lifestyle. I love the food, the comradery in the kitchens and travelling around.

How do you define your style?

I love anything with spice. Spice doesn’t always have to be hot. To me spice can be anything that makes your tastebuds dance.

Fresh Seafood and finding new ingredients that I haven’t seen before.

An ingredient you can’t do without? 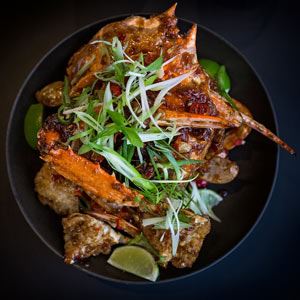 Relax under the peppermint trees with a delicious cocktail in hand at Blue Manna Bistro on Cyrillean Way in Dunsborough. This stylish restaurant is alive with the buzz of conversation as locals and visitors alike settle into polished wood surrounds at black table settings, under the watchful eye of the resident crab adorning the wall. Perhaps linger over lunch in the large alfresco area, while delving into Asian fusion fare like seared Rottnest scallop nigiri, with crispy rice, wakame and plum pickle. For a memorable evening meal, try prawn stuffed chicken wings with Sichuan sweet and sour and fire sauce to start; before tasty mains of Balinese Betutu duck, Asian vegetables hawker’s rice and sambal matah. Finish with an affogato, with a shot of coffee liquor and vanilla bean ice cream.