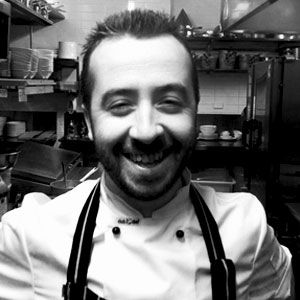 Born:  Limerick, Ireland
History:  I began training in 1993 at the age of 17 at Dunkerleys Seafood Restaurant in Deal in Kent, England.  After my three years as a trainee, I moved on to Wallets Court, a fine dining country house manor.  Three years later I decided to make the move to London and several years later decided I needed to travel Europe and explore all of the cuisines, methods and traditions at my doorstep.  I travelled mostly through the Mediterranean and fell in love with the culture and passion for food.  The idea of a group of people, be it a family or new found friends, sharing the local produce or the ‘catch of the day’, inspires me.  I settled in the south of Spain, soaking up all on offer before making the move to Australia.
Have you always wanted to be a Chef?
From a young age I would help my mum in the kitchen, whether it be peeling potatoes or sifting flour for her soda bread.  Becoming a chef wasn’t always my dream; I wanted to become a professional footballer.  Breaking my leg however ruined that dream.  My dad is my mentor.  He taught me from a young age to be a hard worker and to take great pride in what I create.  Starting out in a professional kitchen as an apprentice was certainly not glamorous.  The countless hours spent peeling carrots, onions and potatoes still haunt me.  However I quickly developed a passion and took great pride in my work.
How would you define your style?
I believe in quality of produce and this is the basis of my style.  Simple and not overworked - I let the produce speak for itself.
What is your feature flavour these days?
Authentic traditional flavours.
Obsessive compulsive about?
Freshness of my produce.
Your greatest culinary inspirations/influences?
Marco Pierre White and of course my mother and father.
What do you love about this business?
Personally, it has enabled me to travel the world and given me the knowledge that there is something out there I’ve never tried.  It may be an ingredient, technique or restaurant.  Also, the ability to get the best out of people.
An ingredient you can’t live without?
Extra virgin olive oil.
Most 'eyebrow raising' menu item?
Braised veal tongue and sweetbreads.
Signature dish:  Five hour oven baked lamb shoulder
Back to Top