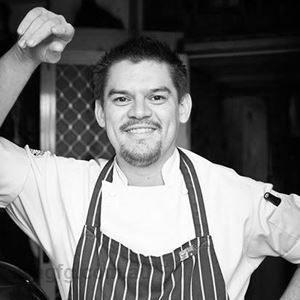 Sydney, but grew up in Brisbane.

Anthony started his career path in cooking whilst at school undertaking a school based apprenticeship. His passion was so strong he completed this whilst studying for his senior certificate.

Anthony was and still is an ambitious, hardworking and an adventurous Chef and has always had a passion for cooking, often giving his mother the night off in his younger years, trying out his cooking skills and new recipes on his family.

His first professional kitchen experience was at Dolci Sapori in Clayfield as a kitchen hand, learning the fundamentals of pastry and bakery. He would also assist Lorenzo Spezzamonte next door at Villa Canova on school holidays for extra work experience. After completing the final stages of his apprenticeship under Brad Jolly of Alchemy Restaurant and Bar, Anthony worked at Peak Fine Dining with James Williams in 2008.

In 2009 Anthony took a working holiday to visit relatives in Wollongong working for celebrated local restaurant Michael’s Trattoria. Upon Anthony’s return to Brisbane he assisted Minh Le to open Teneriffe’s Grasshopper before taking on an international position in Japan.

Anthony took over the kitchens of Hakuba’s Aqua Alpine’s Lodge from 2009 till 2011, returning to Australia in the off season. Anthony worked with highly acclaimed Chefs at the starlight foundation, assisting the 5 Chef Dinner’s in 2010 and 2011 Brisbane with Dominique Rizzo and Tony Percuoco. The dinners gave Anthony the chance to meet Trent Roberson from Belle Époque, which led to a position in the kitchen of Belle Époque up until their final day of trade.

In 2012 Anthony then went on to join Tony Percuoco atTartufo. Followed by Bacchus with Americo Fernandes. After Bacchus, Anthony accepted position of Sous Chef at Survey Co. Another opportunity arrived offering Anthony the live-in Sous Chef position with Spicer’s group at the flag ship Peak Lodge, Anthony accepted and he and his wife stayed on until late 2013 when they ventured to Korea not only to visit family but to learn more of his passion and Korean cuisine.

Upon his return, Anthony worked with several agencies. Anthony cooked for the G20 leader Dinner at GOMA with Josh Lopez, Serviced the parliamentary ministers at Queensland Parliament House and cooked with many highly recognised Brisbane Restaurants/Services, including and not limited to IL Centro, Aria, Gambaro’s Suncorp Stadium, Alpha Inflight Catering, Baguettes, Deer Duck Bistro and Topiaries.

Due to change of ownership of Deer Duck Bistro in late 2016, Anthony ventured interstate on a 3 month culinary journey. During his trip, Anthony dined at several of the most highly acclaimed restaurants in the country comparing the QLD food scene to Southern States and competing stages at Biota, Matteo’s, Grossi Florentino and Marque. Anthony was once again privileged to work along the Starlight 5 Chefs Dinner in Sydney with Mark Best whilst staging at Marque.

Upon return to Brisbane, Anthony accepted the position of Head Chef at The New Inchcolm Hotel and Suites which operates the highly acclaimed Thomson’s Reserve, recipient of 1 Chef Hat for three consecutive years, 3 hats with Gault and Millau and Winner of QLD Best Fine Dining from Restaurant and Caterers.

2017 has been a big year with Anthony placing as a finalist in Appetite of Excellence. Thomson’s Reserve take the award for best fine dining restaurant 2017 from Restaurant and Caterers and being selected by Export Fresh to be their Chef of the month for September 2017.

Yes, we had work choice class in year 7 and were told how much of a hard career this is, but you can travel the world and always be able to find work. I changed high school 3 times to find one with a better cooking program and allowance for school apprenticeships.

Modern Australian, taking different culture’s use of ingredients and techniques and bringing them together with a modern twist.

The customer satisfaction and memories, giving new ones and reliving old.

Culture – the natural bacteria that gives life to soy, starter and yoghurt.