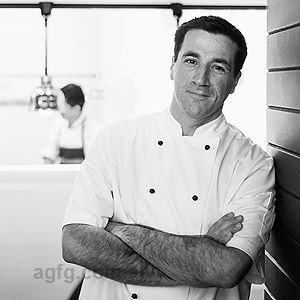 At only 15-years-old, I was given a dream chance in a Michelin Starred restaurant L’Ecrivain under Chef Patron Derry Clark, learning from his mentor and succumbing to a passion of the kitchen that would take me worldwide. I worked throughout the UK and Europe, including Gleneagles Hotel Scotland and then travelled to Australia in 2012 to head up the Best Steak House restaurant in NSW, awarded in both 2013 and 2014 at Prime Restaurant Sydney. I’m now starting my next journey at the award winning* ABODE Bistro & Bar.
*TAA best Metropolitan Restaurant 2015.

As a child I was always behind my mother’s apron strings, sampling all the delights she created. Whilst being her constant helping hand, she taught me the basic skills that became the stepping stone for my career. Even my grandfather had an influence as he would cook up some wonderful meals – pot dishes like rabbit stew or Dublin coddle.

At the moment orange, root vegetables and caramel.

Obsessive compulsive about?
Having the right spoons for service in the kitchen!

My son Derry (also a chef) and Marco Pierre White.

I am always learning and trends are always changing.

I would like to say the scallops, but I think it will be the chicken pate.