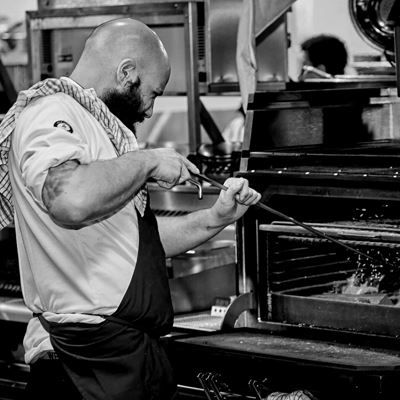 From a very young age, I grew up with Italian heritage on farms. I used to watch my uncles slaughter pigs for the prosciutto and salami, to holding the chickens while my grandfather would take their heads off for fresh, roast chicken… so to say I had an early education wouldn’t be an exaggeration! I also spent a lot of time in the kitchen, fascinated by food as my grandmother and aunties would let me help make bread, pizzas, fresh pasta and biscotti.

Growing up, through school, I had covered and passed all the cooking classes available by year 9, and I always told my parents that I would be a Chef. When my mother passed at the age of 18, I started my apprenticeship as I always told her that I would become a Chef, doing so was paying respect to her memory.

At an English pub, The Pig and Whistle, I began my apprenticeship, learning the fun pace of busy pubs. After a year and a half, I took a job at Bada Bar in Oakleigh, where I learned my way around Greek cuisine. A short 9 months there saw me move out to the valley, working at Stones of the Yarra Valley, where I finished my apprenticeship and learned the fun of functions. It was there that I really fell in love with the industry, working with guest Chefs Greg Malouf, George Calombaris, Frank Camorra and Philippe Mouchel. Six months later and two unsuccessful Sous Chef candidates, my Executive Chef, Dale Prentice, promoted me to his Sous Chef at the age of 22; after three years, it was time for me to move on and keep exploring the fun world of food.

I then got a job at The Heritage Golf and Country Club as Head Chef of the hotel’s restaurant Bella, and the Lodge Bar as well as the room service menu and buffet breakfast. Two years at The Heritage and it was time for me to move onto bigger operations again. I decided to take a job at the Arts Centre Melbourne, as the Sous Chef of all the restaurant venues, where I managed the members’ dining room, Curve Bar, Café Vic, the two Foyer Bars and the President Lounge. I was also involved in the big cocktail functions, where there were 2500 people. Three and a half years into my job at the Arts Centre, I received a call to open Carne Grill, with a concept of fresh, healthy food and breeding their own cattle to put on the plates, I knew that it was the restaurant I had to open.

From when I could start eating solid food, I was just so fascinated by it and always wanted to try new things. As a 3-year-old, my sister would tell me that I would be fed lamb brain pasta, and only eat the brains and not the pasta, then I’d ask for more! My love for rich flavours stuck with me as I grew up and all I wanted to do was to work with food.

Traditional, from making everything in house to doing our own butchery, cured meats, master stock, bread fermentation and really respecting the history of food and traditions.

Our Angus dry age that’s bred on our farms and finished off in our meat fridge.

Cleanliness and organisation, which leads to fresh food.

My Mother, Grandmother and Godmother. My celebrity idols are Giorgio Locatelli, Anthony Bourdain and Ferran Adria.

The satisfaction of training a new apprentice and starting their career off. Also satisfying the paying customer and creating the friendship with the regulars by feeding them great food.

All our steaks, from bag aged to dry aged, cooked on coal and basted with King Valley Dairy butter and seasoned with Murray River pink salt. Simple, good, ingredients, treated with respect.

It’s hard to pick a signature dish, as I like to constantly try new dishes and push the limits of the team to see what we can achieve, but if I had to put my name to one or two, they’d be the 14-hour pedro braised beef cheeks with truffle mash and salted ricotta, or the 20-hour slow cooked beef and pork ragu.